How to Care for Bonsai: Crepe Myrtle (Lagerstroemia indica) 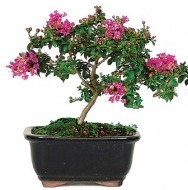 A native of China and Japan, crepe myrtle is a deciduous flowering tree or shrub grown extensively in southern United States and in Mediterranean climates including Southern California. In mid to late summer the plants produce an abundance of large flower-clusters in white, pink, rose, red, lilac or purple. At the same time the bark exfoliates leaving a gray trunk patterned with brown and pink. Plants need lots of sunlight and warn temperatures in summer in order to bloom but even if they don’t produce flowers they are attractive bonsai because of their striking bark. Crepe myrtle is suitable for informal upright, slanting, semi-cascade, and root-over-rock styles.

Position: Crepe myrtle needs a dormancy period so plants should be taken indoors before the first frost and kept at temperatures between 45o and 50o F. At this time they will require less light; the less light the plant receives, the colder the temperatures need to be. In spring, after the last frost, plants can be taken outdoors and gradually acclimated to full sun

Water: Water generously when the plant has leaves allowing the soil to become partially dry between watering. Reducing the watering in mid-summer just before the buds form, however, encourages bud formation. During the winter reduce the amount of water but don’t let the soil dry out completely.

Fertilizer: Feed with liquid bonsai fertilizer ever two weeks as soon as the leaves appear in spring to fall; do not feed during the winter.

Pruning: Pruning during the growing season will result in fewer flowers since most of the buds will be lost. That being said, to shape the plant, cut back new shoots when 6 leaves have developed so that 1 or 2 leaves remain.

Wiring: Wire only 1-2 year old branches that are no thicker than a pencil as older shoots become brittle. Shaping can be done, however, with proper pruning, eliminating the need for wiring.

N. B. Crepe myrtle is very susceptible to greenfly infestations.