How to Care for Bonsai: Fig Tree (Ficus carica) 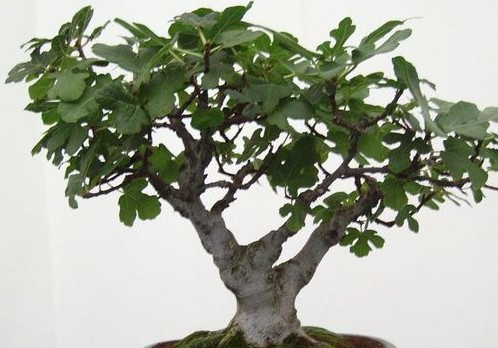 A relative of the popular rubber plant, this native of the Middle East and Mediterranean regions is significantly different because it loses its leaves in winter. Fig trees have been cultivated since ancient times where they grow into sizeable shrubs or trees and yield a highly-valued fruit that develops in the fall and ripens the following summer. The large three-lobed leaves can be a problem when creating a bonsai but this can be overcome be keeping the bonsai in the same pot for an extended period of time, or encouraging the production of small leaves by vigorous pruning throughout the year. Older plants may have long dropping branches. Although the branches are fairly thick, all styles of bonsai are possible if training is started while the plants are young.

Position: Fig tree likes full sun so should be grown out doors in a sunny spot as soon as new leaves emerge in spring until the first frost. In winter fig tree needs cool (41-46o F.) temperatures to force dormancy. The less light the plant gets, the lower the temperature

Water: In summer the soil should be kept constantly moist. To promote small leaves, hold back on the water until the leaves droop. In winter, after the leaves have dropped, watering should be reduced so that he soil almost dries out between watering.

Fertilizer: Feed every other week from spring to fall with liquid fertilizer and twice during the season with an organic fertilizer in powdered form. Older plants with small leaves can be fed once a month.

Repotting: Repot in winter or spring before the new shoots appear every two years when young, every three to four years when older. Vigorous root pruning can be done when repotting.

Pruning: Fig tree can be vigorously pruned throughout the year to attain small leaves. Before the new leaves emerge in spring, all the previous year’s growth should be severely cut back so that the tips of all the shoots are removed. All cuts should be sealed to prevent drying of buds and the possibility of disease. Large leaves can be removed as the develop to encourage the growth of small leaves.

Wiring: Wiring should be started early as the branches become thick while the plants are still young. It can be done anytime of year but the best time is in spring just as the new shoots emerge. One year old branches are usually flexible enough to wire easily; older branches are not.

Propagation: Seed (soak fruits in water for a few days to release seeds from flesh); cuttings in spring before they become woody

Comment: Fig trees are susceptible to attack by scale insects.