How to Care for Bonsai: Olive (Olea europaea) 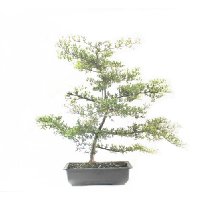 This evergreen tree or shrub is native to the Asia,, Africa, and the Mediterranean. It is known in literature from Homer’s time, is important in Greek mythology, and is one of the most mentioned plants in western literature. Famous for its oil and wood, the plant is very long lived and is still an important agricultural crop in the Mediterranean as well as in parts of the United States. The narrow, leathery leaves vary in length depending on the variety and have dark green tops and grayish-green undersides. Whitish-yellow flowers are borne in the leaf axils on the previous year’s growth and are followed by green fruits that ripen to black in late summer to fall. The trunk is usually twisted and gnarled, and develops fissured bark when old. Olive is suitable for all bonsai styles.

Position: Olive can be grown indoors throughout the year in a sunny location but will do best if taken outside in mid spring for the summer and placed in the sun. Plants should be brought in doors during the winter and ideally kept at 41o to 64o F. If winter temperatures are higher, at least try to reduce nighttime temperatures

Water: Water heavily as soon as the soil dries out slightly. If kept in ideal conditions during the winter, the plant will not need much water. The warmer the winter temperatures, the more water it will need.

Fertilizer: Feed with a bonsai fertilizer every two weeks from spring through summer; once a month in winter.

Repotting: Repot every two to three years in the spring, and root prune at the same time.

Pruning: Cut back new shoots to two pairs of leaves when they have eight pairs of leaves. Since olives grow mainly in the spring and autumn pruning is best done in early autumn or early spring.

Comments: Spider mites can cause serious problems and often go undetected for a long time. Look for deformed leaves that drop while green, and fine webs. Insecticides give only short-term control.