How to Care for Bonsai: Rosemary (Rosmarinus officinalis) 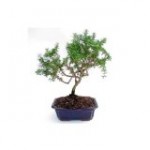 Rosemary is commonly associated with herbs and cooking but it makes a fine bonsai plant because of its attractive leaves, flowers and trunk. A native of the Mediterranean countries where it is an evergreen shrub reaching five feet, rosemary has small, dark green, needle shaped, and fragrant leaves with a silvery underside. The small flowers are violet-blue and produced in early spring. The bark on the trunk sheds making the plant look older than it is. There are many different cultivars of rosemary varying in both flower color and growth form, from prostrate to upright, so plants can be shaped in several different styles such as informal upright, cascade, semi cascade, and windswept, depending on the cultivar. Rosemary is considered an excellent choice for a beginner because an attractive bonsai can be created in a few years. Rosemary does not take well to indoor growing conditions, however, and so is best grown outside in the summer.

Position: Rosemary needs 6-8 hours of light each day. It should be grown indoors in an area with bright light and cool temperatures (41o F-46o F) and moved outdoors and placed in full sun after the last frost.

Water: Do not let the soil completely dry out but do not over-water or the plant will drop leaves and branches. More watering is required in summer than in winter. Placing a wooden shish kebab stick in the soil to test the soil moisture is a good way to determine if the soil is dry.

Fertilizer: Use a balanced, non-acid, liquid fertilizer every three weeks from spring through fall, discontinuing in winter.

Repotting: Repot every two years in spring immediately after flowering. Root prune at the same time, removing no more than one third the root system.

Soil: Soil should be loose fast-draining, and composed of 50% soil and 50% coarse sand, perlite, pumice or other similar substance. Rosemary does not like acid soil and peat should be avoided. If soil tends to be acid, add 1 teaspoon of lime to an 8” pot.

Pruning: Plants can be pruned all year. New shoots can be pinched continuously or cut back in early autumn to make the foliage more dense. Prune roots no more than one third when repotting.

Wiring: Only new growth can be wired as older growth is very brittle. Branches are best wired spring through summer when they about half the diameter of a pencil.