How to Care for Bonsai: Southern Yew (Podocarpus macrophyllus) 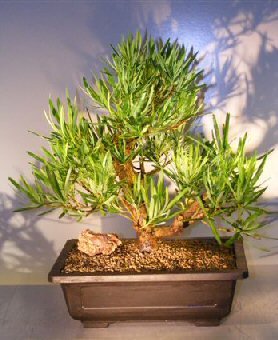 Also known as Buddhist pine, southern yew is neither a yew nor a pine. It is native to Japan and China where it is a popular landscape tree especially in temple areas. The tree is an evergreen conifer and has broad dark green yew-like needles that grow in dense spirals. Fleshy, berry like cones ripen to bluish-green to purple-red. The cultivar ‘Maki’, a native of China, is slower growing than the species, and has a dense, upright habit, and shorter leaves, making it a desirable subject for bonsai. It is suitable for many styles; formal upright, informal upright, slanting, cascade, semi-cascade, literate, rock-over-root, clasped-to-rock, twin-trunk, clump, group, and saikei. The upright and cascade styles are most popular.

Position: Podocarpus can be kept indoors all year round in bright light. From spring to autumn plants can be kept outdoors in a bright place but should be slowly acclimated to the site. Bring indoors for the winter and keep at temperatures between 61o and 68o F.

Repotting: Repot every three years in late spring; root pruning can be done at this time but note the comments below on pruning.

Pruning: When new shoots are four inches long cut them back to .4-2”. Podocarpus resents root pruning so remove no more than one-eighth the root mass at any one time. Use great care when untangling the roots to avoid the loss of shoots and branches. Water sparingly for a few weeks after root pruning to encourage root growth.