How to Care for Bonsai: Weeping Fig (Ficus benjamina) 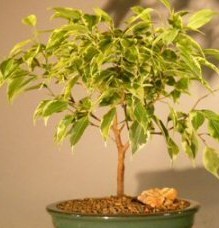 This native of India and Malaysia is a tall evergreen tree with drooping branches and light to deep green leaves with wavy edges. The short trunk has smooth, silvery-grey bark and is supported by numerous aerial roots when grown in warm humid conditions. Small fig-like green fruits turn red with maturity. A common household plant, weeping fig is easy to grow and tolerates indoor conditions so is a good plant for a new bonsai enthusiast. Many varieties exist and vary in the size of their leaves. The variety exotica and cultivar ‘Natascha’ are especially valued as bonsai and tolerate low light levels. Weeping fig is suitable for most Japanese styles; formal upright, informal upright, slanting, cascade, semi-cascade, broom, rock-over-root, clasped-to-rock, twin-trunk, saikei, clump, sinuous, straight line, and group planting. Because of the relatively large size of the leaves, plants should be allowed to grow about twenty inches tall in order to create pleasing proportions.

Position: Weeping fig can be grown indoors all year but will be more compact and stronger if given time outside in a warm placed with plenty of light. Indoors, it does best near a radiator on a humidity tray in a place with bright light. It can be taken outdoors in mid-spring and gradually acclimated to full sun. When temperatures fall below 60o F it should be brought indoors again and kept at a temperature between 59o and 75o F, although it will tolerate temperatures up to 82o F . If the bonsai is put in a place that is too dark it will lose its leaves.

Water: Using tap water that has stood for 24 hours, water as soon as the soil appears dry. Less watering will be necessary in winter when the temperatures are lower. Avoid over watering or the leaves will fall and the roots will rot.

Fertilizer: Use a liquid bonsai fertilizer every two weeks from spring to fall; every four to six weeks in winter.

Repotting: Young plants should be repotted every year; older plants every two years. Spring is the best time for transplanting and root pruning should be done at the same time.

Pruning: Pruning can be done throughout the year. New shoots should be shortened to two to three leaves once they are about eight inches long and/or have six to eight leaves. To encourage the growth of lower branches, keep the top one-third shoots short. Cut back old growth to keep the plant compact; new shoots will quickly appear. Ignore the sticky sap that appears when branches or leaves and cut off; it aids healing and is not a problem.

Wiring: Although the branches remain flexible for a long time and are easy to shape, they quickly thicken so check wires in six to eight weeks to avoid damage.