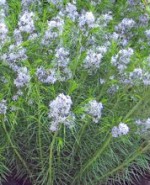 Botanically called Labiatae and more recently, Lamiacea, the mint family is large and made up mostly of annual or perennial herbs, many shrubs, and rarely trees. It includes a large number of culinary herbs such as mint, rosemary, basil, oregano, marjoram, thyme, lavender, savory, sage, and hyssop, as well as some common garden plants such as coleus, Lamb’s ear, ajuga, agastache, beebalm, bells of Ireland, bluestar, and the salvias. The older family name, Labiatae refers to the fact that the flowers typically are fused to produce an upper and lower lip (Latin, labia). The newer family name Lamiacea comes from one one of the prominent genera, Lamium, the deadnettles.

Identification of members of the Mint Family requires a look at the stem and flowers as well as crushing a leaf. The key characteristics to look for are:

The stem is square in cross section.

( Note: A few species do not have this characteristic and a few plants that are not in the Mint Family have square stems too)

Leaves are opposite each other on the stem

Flowers have five fused petals that form an upper and lower lip. The upper lip has two lobes, the lower has three.

If identification is not clear from using the four characteristics above you can look further. The flowers have bilateral symmetry, are usually in clusters, heads, or whorls, and have four stamens, two long. and two short.

Like the petals, the sepals are fused and are connected at the base of the ovary along with the petals. The seed capsule contains four nutlets.

There are over 200 genera and 3,500 species in the mint family, of which 50 genera are found in North America.