Botany for Gardeners: The Root-Tissues and their Functions 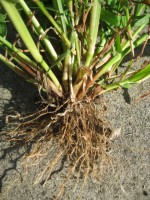 Roots aid plant development and growth in many ways.  They absorb water and nutrients, and serve as anchors, support for the stem, and storage organ of food and nutrients.  Inside, they contain a variety of tissues that are specialized to aid them with these functions.  Let’s take a look at the anatomy of a root. 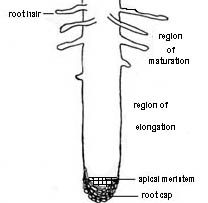 If you cut a large mature carrot root longitudinally (the long way) you will see that the tip looks different from the area near the top where the leaves grew.  If you looked at a very young root tip under a microscope you would see several different areas:

Cut another large mature carrot in half horizontally so you can get a cross section view.  You will notice that there are rings of slightly different shades of orange.  These are the various tissues that are all important to the root in carrying out its functions.  Starting at the outer edge, here are the tissues and their functions. 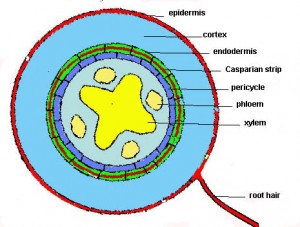 Epidermis: The cells of the epidermis form a  protective layer on the outside of the root. As the outer covering of the root the epidermis is in contact with soil and the air and water the soil contains and water can freely pass through the epidermis into the root.  Many epidermis cells produce root hairs but don’t expect to see root hairs as they are made up of only one cell.  The root hairs add a considerable amount of surface area to the root and thereby increase the root’s ability to absorb water and minerals.  When you transplant a plant these root hairs are easily damaged resulting in less water absorption by the plant.

Cortex: Loosely packed cells inside the epidermis form the cortex tissue and make up the bulk of most roots. The cortex is an important food storage tissue.

Endodermis: The thin ring of cells on the inner edge of the cortex called the endodermis,  can be identified by the waxy material that occurs between their cells walls (Casparian strip) The waxy substance allows the endodermal cells to regulate the flow of water and dissolved minerals in the root.

Pericyle: A single layer of cells called the pericyle forms a ring just inside the endodermis and is responsible for producing branch (secondary) roots.

Vascular Tissue: Specialized cells for carrying food and water form the center of the root and are of two types, phloem and xylem.

Phloem: Pockets of thin walled cells lie between the arms of the star and are responsible for food transport.

Xylem: In the center of the root is a cell or group of thick walled cells that carry water.  In many roots the xylem forms a star in the center.

The six different tissues that make up the root work together to make the root an efficient organ that can meet the needs of the stem, leaves and flowers. The various tissues protect the root, store food, produce root hairs and more roots, and absorb and carry water and minerals.  In return they get food from the leaves, via the stem.  Nice set up.