Beneficial Insects and How To Attract Them: Damsel Bugs 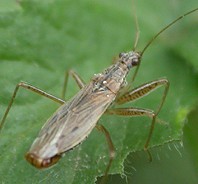 There are over five hundred species of damsel bugs worldwide, forty of which are found in North America. They belong to the insect family Nabidae and the most common ones are in the genus Nabis. Damsel bugs (also called Nabids) are generalist predators and are found in many crops and gardens where they stalk and ambush their prey. They are 1/4 to 1/3 inch long and usually yellow to tan-colored although there are also black ones. Their legs are stilt-like and the front legs are slightly larger than the other legs to facilitate grasping their prey. Their narrow heads have large bulbous eyes, long antennae and a flexible, needle-like mouth part that is tucked under the head and body when not feeding. They have two pairs of functional wings and some species are excellent fliers.

Most damsel bugs overwinter as adults and begin their life cycle a bit later than other predatory insects with peak activity in mid- to late summer.. The females lay up to two hundred white oval eggs in plant tissue and the nymphs that emerge in eight to twelve days look like the adults but are wingless and smaller. The nymphs go through five instars over a period of three to four weeks, living on the ground in plant material or soil and eating the same kind of diet as adults..

Damsel bugs need cover for resting and over-wintering, plants for egg-laying, and plenty of other insects for food. They can be found in field crops such as alfalfa, soybeans, and other legumes, grassy fields, and gardens. To encourage damsel bugs in a garden, select a large variety of plants that will attract many kinds of insects for their food supply. Especially good choices include caraway, Cosmos bipinnatus, fennel, spearmint, golden rod and marigold (Tagetes tenuifolia).  Incorporating ground covers, grasses and low shrubs into the planting scheme provides shelter and is especially beneficial.