Birds in the Garden: Plants that Attract the Mockingbird and Catbird Family (Mimidae) 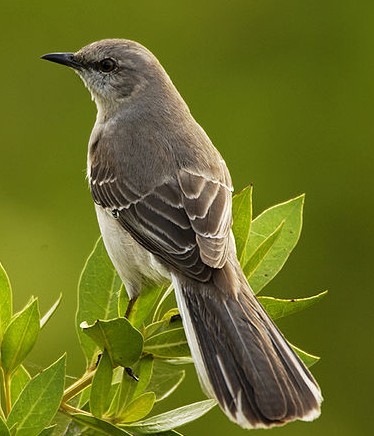 The Mimidae are American birds and include the thrashers as well as mockingbirds and catbirds. They are also known as mimic thrushes but this name applies best to the mockingbird that is known to include in its song phrases from other birds as well as all sorts of other sounds. Mimidae are usually gray, brown or a mixture of the two. They are relative large birds, have long tails, strong legs adapted for scratching through leaves searching for insects, and down-curved bills that vary among the species depending on the food source. Some Mimidae migrate while others just move around in their large territory. They may be seen all over the US with the possible exception of the Pacific Northwest. Mimidae generally like thickets for cover and eat a diet of half insect, half fruits and berries. Favorite insects include beetles, ants, grasshoppers, tent caterpillars, centipedes, bees, wasps, and sow bugs, all found at ground level.

Since Mimidae like thickets, planting shrubs is a good way to attract them. Choose those that produce berries and fruit to provide food in winter. Here are some shrubs that are especially favored by this family.

These deciduous shrubs have small leaves, lots of thorns, small flowers, and small berries. There are many attractive cultivars with both red and yellow foliage to add color to your garden while providing cover, berries, and insects on the foliage and flowers for Mimidae. Vireos will also enjoy the food and nest sites, thrushes and wrens will come for the berries, and warblers will dine on the insects attracted by the flowers. Cultivars vary in the abundance of their flowers and fruits so make your selection carefully

This clump-forming evergreen to deciduous shrub or small tree has aromatic foliage and waxy white berries that persist though the winter into spring. Male and female flowers are produced on different plants so both genders must be planted to ensure berries. The berries are favored by mimidae as well as migratory vireos and other birds such as tree swallows, thrushes, wrens and warblers.

There are many native currants as well as cultivars bred for their fine tasting berries. Some states restrict the growing of currants because the plants harbor white pine blister rust. Mimidae are attracted to the fruit and the insects on foliage and flowers and also enjoy the cover that the thorny plants provide. Thrushes and woodpeckers attracted too.

There are many roses to choose from but one of the outstanding kinds is the very thorny Rosa rugosa which is very disease resistant and never needs spraying. R. rugosa are fairly upright and sucker readily to form a mass of stems that appeal to Mimidae for cover and nesting. The Mimidae also are attracted to the insects that come to the bushes and the rose hips that follow the flowers. Warblers and vireos may also be attrcted by the insects on flowers.

Plant a everbearing cultivar like ‘Heritage’ so you have berries in both in early summer and fall. The plants are deciduous and have long, arching thorny canes that provide desirable cover and nesting sites for Mimidae. The fruit is food for Mimidae as well as thrushes, wrens, orioles, tanagers, and warblers.

Photo of mockingbird from Wikipedia