Birds in the Garden: Plants that Attract the Oriole Family (Ictridae) 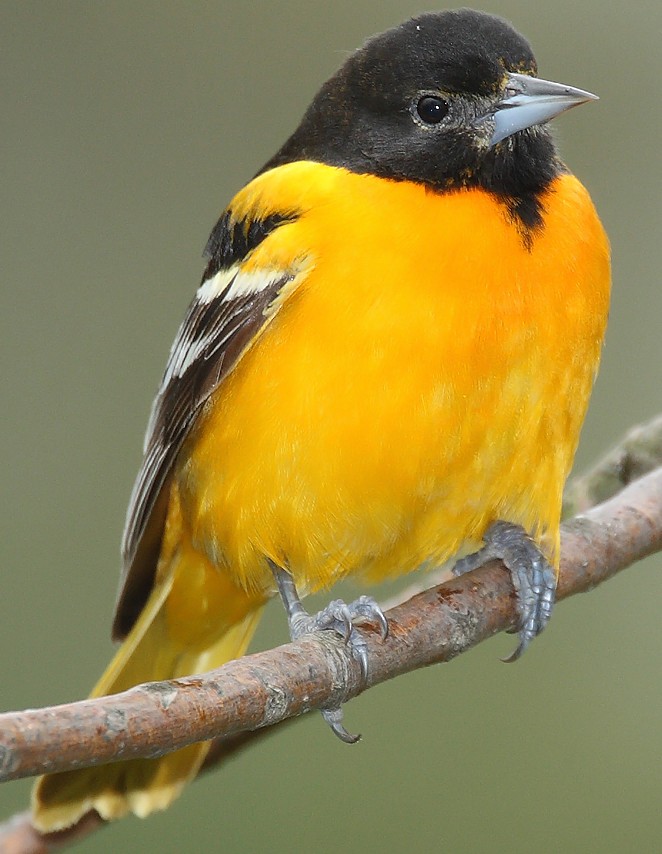 The Ictridae family includes orioles, grackles, cowbirds, meadowlarks and bobolink as well as New World blackbirds. New World blackbirds include the redwinged blackbird and is unrelated to the common American blackbird. The whole family is restricted to the New World and most live in the tropics. The members of the family that inhabit the temperate zone are migratory and only spend part of the year in the United States. Their habitats range from swamps to forests and savanna and their nesting habits and food preferences vary accordingly. Meadowlarks and bobolinks live in grassland, while blackbirds are adaptable and widespread. Orioles are not as adaptable as blackbirds and are especially attractive with their contrasting black and orange plumage. The two most common orioles are the Baltimore and Bullocks; the former covers the eastern three-fifths of the country while the Bullocks overlaps with the Baltimore in The Plains and extends to the Pacific coast. Other orioles can be found in the Southwest. All orioles have a long tapering beak with a sharp tip adapted for eating insects and fruits. Some even sip nectar. Favored insects include butterflies, caterpillars, beetles, and ants; fruits iclude mulberries, wild cherries, serviceberries and wild grapes.

Since most blackbirds will come to a backyard without encouragement the plants suggested below focus on attracting orioles.

Native to southern and western United States, agaves are perennial succulents composed of a large rosette of fleshly leaves usually with spiny edges and a sharp point. Each rosette produces a tall stem with tubular flowers, produces seeds, and then dies. Suckers forming around the rosette, however, frequently form new plants to replace the original one. Orioles love the nectar as do hummingbirds.

Fragrant flowers in spring followed by delicious fruit in the fall and winter make this evergreen tree a standout in warm climates. Orioles are attracted to the fruit, the insects at the flowers and enjoy the cover orange trees provide. Other birds like warbles and vireos may visit the flowers for the insects too.

The clusters of fuzzy flowers in shades of red, orange, pink or white are produced sporadically all year on this compact evergreen tree. Orioles enjoy both the nectar and the insects at the flowers as do hummingbirds. The insects are also appealing to such birds as vireos, warblers, and tanagers.

Fast growing, this medium to large deciduous tree produces an abundance of soft berries. The berries may be white, pink, red, or black so find varieties with white berries if staining will be an issue. Although white mulberry can be a large tree, it can be kept small by judicious pruning in late winter. Orioles are drawn to the fruits as well as insects at the flowers and on the foliage as are many other birds including tanagers, flycatchers, vireos, and warblers. Avoid fruitless cultivars. Tolerant of drought, urban and seaside conditions but can become invasive.

Native to eastern North America, chokecherry is a small deciduous tree with fragrant white flowers that give way to showy fruits purple fruits in late summer. The cultivar ‘Schubert’ has purple leaves. Orioles enjoy the fruit and insects at the flowers and on the foliage as do many other birds such as tanagers, flycatchers, vireos, and warblers.

Native grapes such as V. riparia, V. labrusca, and V. rubra are deciduous vines that produced fruit that are popular with orioles as well as with thrushes, woodpeckers, flycatchers, warblers, jays, vireos, and tanagers. Orioles also enjoy the insects at the flowers and on the foliage. V. labrusca includes the cultivar ‘Concord’ and is the grape juice grape. The peeling bark and dead stems are used for nest building by many birds.

Photo of Baltimore Oriole from Wikipedia