The Christmas season always ushers in the use of special plants and mistletoe is one of them. I have never been partial to it but have always been intrigued by myths and good stories. Mistletoe first caught my interest when I studied Virgil’s Aeneid and learned that the golden bough that Aeneas, ancestor of the Romans, needed to enter the underworld could have been mistletoe, that is, European mistletoe, Viscum album. North America has a similar plant, Eastern mistletoe (Phoradendron serotinum), and both kinds are in the same plant family, are parasitic, and have woody stems, evergreen leaves, and waxy white berries. From that description it is difficult to believe that such plants could have inspired a large body of lore but they have.

The ancient Roman naturalist and writer, Pliny the Elder, tells us about mistletoe and the Druids. They considered mistletoe and the oak tree on which it grew sacred and were especially inclined to collect it especially on the sixth night of the new moon of the winter solstice. After assembling a banquet and preparing two white bulls for ritual sacrifice under the mistletoe-bearing tree, a priest dressed in white robes climbed the tree and cut the mistletoe with a golden sickle. Freed from the tree, the mistletoe fell but was caught in a white cloak to avoid misfortunes associated with touching the ground. After the sacrifice had been completed, the druids offered prayers to a god and used the mistletoe to bring fertility to barren animals, and as an anecdote to poison. Some say that the Druids also used mistletoe in their homes to ward of evil spirits.

A Norse legend from the 13th century tells us the story of a loving mother and how her tears became the berries of the plant. Frigga, a seer and well known Norse goddess, tired to avoid the death of her son Baldur by extracting an oath from all living things that they would not participate in his death. Somehow she did not get a pledge from mistletoe, so when the evil trickster Loke made a dart of the posinous plant, gave it to Baldur’s brother, and encouraged the boys to plays a game of darts, Baldur was mortally wounded and died. Freggi’s tears of morning for her dead son became the berries of the mistletoe. 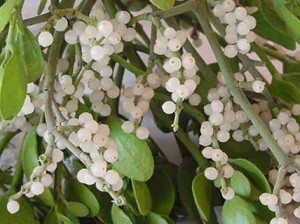 The French name for mistletoe, “herbe de las croix’, is explained by the belief that mistletoe was once a tree that was used to make the cross for Christ. Afterward it was cursed and so became a parasite.

The origin of the custom of kissing under the mistletoe is disputed. Some say it came from the ancient Romans custom during Saturnalia, their December celebration of the birth of Saturn. During this time, there was great drunkenness, lawlessness, and sexual activity and couples are believed to have kissed under the mistletoe and plucked a berry from the plant with each kiss. Other people say that the custom has a more benign Scandinavia origin in more recent times, adding that the privilege of kissing under the mistletoe ends when all the berries are gone. Since Eastern mistletoe has more berries than European, look for the former if you want to promote kissing.

To get some mistletoe for the holiday season go to a florist; don’t bother to look on oak trees, it doesn’t grow on them; apple trees are more likely but the florist is a better bet.