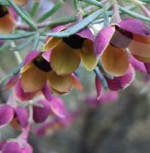 Boronia (bor O’ ni a) From the name of Francesco Borone from Milan Italy who was hired by English Botanist J. E. Smith as a servant to collect plants with him. He died in 1794 at the age of 25 from an accidental fall from a window. Smith praised Borone for his keen ability to discern the differences between plants and named the genus after him.

Boronia is a genus of 90-100 evergreen fragrant shrubs native to Australia where they grow in open forests and woodlands. The genus is a member of the rue family (Rutaceae) that also includes citrus plants. Plants tend to be short-lived and are difficult to grow; they demand part shade and well-drained soil.

Two species are of particular interest.

B. megastigma, also known as brown boronia, is grown for it essential oils and attractive scent. It is about three feet high and has thin branches that carry thin dark green fragrant leaves and brown or dark red-purple flowers with yellow interiors. The flowers are slightly less than ½ “ wide, cup-shaped and fragrant. The species name comes from the Greek words mega meaning large and stigma referring to the female part of the flower, thus noting the large stigma of the plant.

B. heterophyla is important to  the florist trade where it is used as filler with its bright magenta-pink waxy flowers and small fine leaves. Both stems and leaves have a sharp lemony fragrance when cut, bruised or touched. The plants are round or oval and grow about four feet high. They do not tolerate drought or hot winds and need careful watering in summer heat. The use of mulch or rocks to cover the roots and keep them cool is very beneficial.