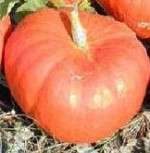 This Latin word is used as the genus name for summer and winter squash, pumpkins and some gourds. Cucurbitae are native to the New World where they were grown for food for many centuries but were introduced to Europe after the discovery of America. Most are vines and have separate male and female flowers on the same plant. The flowers have five fused petals and are yellow or orange. The fruit a modified berry called a pepo and has yellow or orange flesh.

The earliest record of edible Cucurbita is in Mexico where squash seeds over 7000 years old have been found. Squashes and pumpkins were a major food source in North America by the time the Pilgrims arrived, hence their association with Thanksgiving. The Cucurbita fruits provide carotenoids that is needed for vitamin A and rhodopsin production so is important to sight.

Squashes, pumpkins and gourds are grouped in the family Cucurbitaceae which also includes melons, cucumbers, gerkins, chayote, and true gourds. Melons date back to the time of the Egyptian pharaohs and cucumbers are believed to have been an important food crop throughout Africa. All Cucurbititaceae are frost sensitive and do best in temperate to tropical climates.