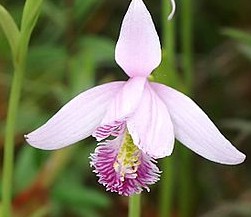 Pogonia is a genus of terrestrial orchids that includes four species native to temperate regions, mostly in Asia. The generic name is derived from the fact that the lower lip is densely bearded with white to yellow bristles near the throat. Only one species, P. ophioglossoides, is found in North America. It is found in eastern US were it grows in wet areas such as bogs roadside ditches, and acidic The flowers are fragrant and white to pink in color. Other names for this plant are beard flower and snake-mouth-orchid.

Pogon is also combined with words to form other plant names. Calopogon, grass pink, combines pogon with the Greek word kalos meaning beautiful. Calopogon is a terrestrial orchid with five species native to eastern US and Canada, Cuba and the Bahamas.

Ophiopogon, turf lily, combines pogon with the Greek word ophis, meaning snake and is believed to refer to the leaves and growth habit. Turf lily is an evergreen perennial native to tropical Asia and looks much like grass and lirope. The most common turf lily is O. japonica which is used extensively as a edger and groundcover.

Tragopogon, also known as salsify or goatsbeard, combines the Greek word trogos, meaning goat, and pogon referring to the possible resemblance of the seed head to a goat’s beard. This genus is biennials or perennials and includes the vegetable salsify as well as wild flowers and weeds. The plants are native to Europe and Asia but some species have adapted well to regions of Australia and North America.