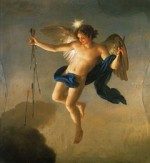 Hesperus; Personification of the Evening Star

Hesperus (HES per us) derived from the Greek hesperos, meaning  evening

In Greek mythology, Hesperos was associated with the evening star, which was the planet Venus in the evening. He was thought to be the son of the dawn goddess Eos and the half brother of Phosphorus, the morning star, which was the planet Venus in the morning. Greek astronomers mistakenly thought the morning and evening stars were two different bodies not realizing they were both the planet Venus. The most famous offspring of Hesperos were the Hesperides, nymphs who had a splendid garden with at least one golden apple tree. One of these apples was thrown by Eris, the goddess if discord, into the midst of Hera, Athena and Aphrodite, thus setting off events that led to the Trojan War; other apples were the object of Hercules’ eleventh labor.

A form of Hesperos can be used in botanical nomenclature to refer to its origin in the West, or to a characteristic of the plant that occurs in the evening.

The genus name of Hesperaloe parviflora (red flowered false yucca) means “western aloe” in reference to the fact that it is an aloe like plant from North American. Dames rocket, Hesperis matronalis, is an old fashioned biennial that is fragrant in the evening. A yellow daylily bears the cultivar name ‘Hesperus’.