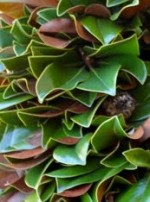 Few plants evoke images of the South like southern magnolia. The tall evergreen trees are native from coastal Virginia to Florida and west to Texas and Oklahoma and it is the state tree of Mississippi, the state flower of both Mississippi and Louisiana. The flower was also the emblem of the confederate army in the Civil War. Its flowers, however, are not what makes the southern magnolia so precious at Christmas. It is the large beautiful leaves; glossy dark green on the upper surface, fuzzy brown on the lower surface. Described by one floral designer as “the ultimate in decorative glamour”, the leaves are used in wreaths, mantelpieces, garlands, and vase arrangement.

The early naturalists were in awe of this marvelous tree. John Bartram, the 18th century Pennsylvania Quaker farmer of English descent who became America’s first botanist, referred to the tree and the “glorious magnolia” in his writing about his trip through the Southeast. In 1757 Dr. Alexander Garden, a plant collector and Scotch physician practicing in Charleston, S. C. described it as the finest and most superb evergreen tree that this earth produced.” Dr. Garden was a loyalist and returned home at the outbreak of the American Revolution. Southern magnolia had been introduced into England about 1726 by plant collector Mark Catesby, but never thrived there like it did in the Southeast.

Legend tells us that the Indians knew the plant and would not sleep under a magnolia tree. It was believed that the powerful fragrance of a single flower in a room could cause death in one night but that fact does not explain why the sleeping preferences of the Indians in regard to sleeping outdoors under a tree, especially if the tree was not in bloom.

Southern magnolia was name by Linnaeus in 1759 after Pierre Magnol, a 17th century professor of medicine and director of the botanic gardens in Montpelier, France. The species name, grandiflora, comes form the Latin words grandis meaning large and flora meaning flower, and refers to the very decorative white flowers of the plant that measure up to 8” across. Other names for southern magnolia include bull bay and big laurel.