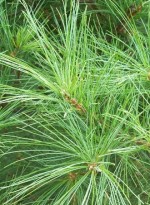 Decorating for the Christmas holidays inevitable leads to using white pine, valued for its long, flexible needles that stay on the branches for weeks after being cut. The bluish-green color with silvery highlights adds a frosty look making it an idea green for wreaths, garlands, and table arrangements. White pine also a popular Christmas tree especially in the Northeast but that is not the only reason white pines are interesting.

White pines are the tallest timber trees in the Northeast and impressed the early settlers by there lack of branches on the lower stem as well as their height. 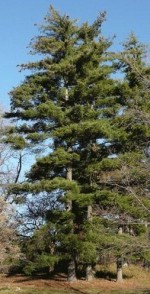 The knot free wood was attractive and relatively easier to lumber so white pine became the wood of choice for many things including houses, furniture, and ships. The abundance of the high quality lumber provided by white pine was noticed by English shipbuilders whose source of lumber for ship-building was Scotch pine, a tree only about half the size of white pine. In addition, the British had depleted their sources of wood by the 17th century and so were on the look out for new ones.

The white pine forests of New England offered the British a grand opportunity to solve their problem. The great height of the white pine trunks was especially valued for masts but the tree also could provide pitch, tar, resins and other products involved in shipbuilding as well as lumber for planking and spars. To ensure the dominance of their navy the British took over control of mature white pines by establishing laws regarding the cutting and milling of white pines. Royal surveyors were sent out to mark the straightest and tallest trees with the “King’s Broad Arrow”, three slash marks resembling an arrow on a short shaft. These trees were reserved for the British navy and settlers could not cut them. Strict punishments were laid out for offenders but of course they did not deter the colonists and numerous skirmishes between them and the king’s men resulted. The American Revolution finally put an end to the problem.

The significance of white pine to the eruption of the American Revolution can not be compared to the situation regarding tea but it was certainly another irritation between the colonists and England. For England, the future and well being of the British navy was at stake, for the colonists control over their own resources and perhaps their livelihood was the issue. White pine is still a valuable timber crop used for house construction, a good landscape tree, and a popular Christmas green all thanks to reforestation efforts.