Facts about the “Partridge in a Pear Tree” 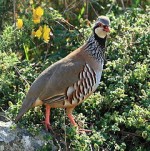 The partridge in a pear tree is a familiar image at Christmas time especially during the twelves days afterward commemorated by the famous song.  But have you ever thought about the partridge or the pear tree? What kind of partridge? What kind of pear tree? The song comes to us from England but is probably of French origin dating to the 18th century so we have to think of European birds and fruit trees. Of course, some people suggest that the song has a Christian meaning and that the partridge stands for Christ and the pear tree for the cross but that is a later interpretation.

The partridge of the “Twelve Days of Christmas”  is probably the French red-legged one because it is more likely to be in a tree than the English gray one. Both partridges prefer land to trees and are generally found in farmlands. Both are popular game birds and the English partridge has been introduced widely into North America.

Pears were eaten in Europe since prehistoric times. Traces have been found in Neolithic settlements, pear trees are mentioned in the Odyssey, and the ancient Romans are known to have cultivated 36 different varieties of pear and eaten them stewed with honey. The 16th century English herbalist, Gerard, distinguished between the “wilde Peare” that had wood suitable for making instruments, and the “tame Peares” that were grafted onto wild stock and produced “much variety of good and pleasant fruits.” He noted that pears differ “in greatnesse, colour, forme” and time of ripening and commented on the medicinal value of pear wine. Exactly what variety of pear was used as a perch by the French partridge of the song is not known but since partridge like to live around farmlands any of the cultivated varieties as well as the wild form would be a possibility.

Perhaps there are those whose Christmas spirit leads them to consider giving their loved one a partridge in a pear tree this season. A small pear tree likely to set fruit in 3-4 years, ordered bare root from an online source, runs about $50 with shipping.  Red legged partridges are difficult if not impossible to find in the United States but if you are satisfied with an English partridge, one can be bought for $20 (plus shipping). The biggest problem, of course, will be convincing the partridge to stay in the tree but the gift will be unique even if you have to cage him or take him to a taxodermist and have him stuffed.