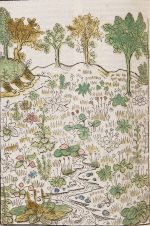 This watercolored illustration from the 13th century work De proprietatibus rerum (On the Properties of Things) shows some of the plants that grew during the Middle Ages in Europe.  De proprietatibus rerum was written at the school of Magdeburg in modern day Saxony  by the Franciscan monk Bartholomaeus Anglicaus (before 1203-1272 ), and was intended to be used by the students and general public.  It was an encyclopdia-like work with a focus on theology and astrology as well as the 13th century concept of natural sciences.

The pictures shows a meadow bisected by a meandering stream,  surrounded by trees growing on mounds, and filled with flowering herbaceous plants.  Mounds and streams became important features of medieval gardens where they represented two of the three kingdoms of nature.  The flower-filled meadow hints at the flowery mead that became popular later in the Middle Ages.

Such meadows with their wild flowers were probably a source of plant material  as interest in pleasure gardens grew.  Botanical accuracy aside, some of the plants can be identified such as  daisy, dandelion, plantian and violet, while coltsfoot, lily, and mullien can be supposed.  All of these plants would have been ornamentally valuable in a garden.  Notice in the background the trees growing with grape vines.  The practice of growing the vine on specially pruned elm trees is carried out in places in central Italy even in modern times.

De proprietatibus rerum was one of the most popular encyclopedias of medieval times.  Although it drew from ancient sources such as Aristotle and Pliny, it was original enough to be translated into several languages and went though at least 24 printings before 1501.