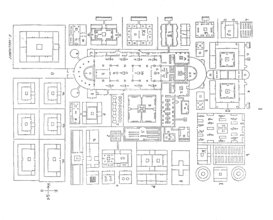 The plan of St. Gall dates from 820-830 AD and showed an ideal Benedictine monastic compound including buildings and gardens for a total of 110 monks, 115 visitors, and 150 craftmen and agricultural workers. All though the plan was probably never carried out, it provides a look at medieval culture including gardening as four different cultivated areas can be recognized:  the cloister, vegetable garden, physic (herb) garden and orchard. These garden provided not only food and medicine but also a place to enrich the spirit and engage the body in productive labor.

The plan reflected the principles of the Benedictine Rule which emphasized an ascetic life for the monks, dedicated to prayer, meditation and study while being  self-sufficient and providing what was needed to nourish the body as well as soul.  Three cloisters were included in the plan, a large one  located in the center of the plan on the southern (sunny) side of the basicilica and sharing a wall with it, and two small ones for noviates located on either side of the subsidiary church on the eastern side of the basicilca and plan.  The cloisters provided a place for education, exercise, and mediation and surrounded a square garth that was divided into 4 sections by 2 intersecting paths.  The paths formed a cross and probably had a fountain or tree at the intersection.  The number 4 was significant by representing the 4 rivers of Paradise, the 4 cardinal virtues, and the 4 evengelist.  A central fountain may represent the source of the rivers in Paradise as well as the image of Christ, origin of life and salvation while a central tree may symbolize the wood of the cross or the Tree of Knowledge.

South of the orchard and next to the poultry yard lay the kitchen garden occupying about 1/10 of an acre.  The location is opportune as it facilitated the use of the poultry droppings to enrich the nearby vegetable garden.  The kitchen garden was rectangular and composed of 18 beds arranged in two parrallel rows of 9 each.  Each bed was 20′ long and 5′ wide to facilitate weeding and harvesting.  The path between the rows was 5′ wide a could accomodate two people walking side by side.   The paths between the indiviudal beds were 60″ wide and could accomadate a wheelbarrow or cart.  A 45″ wide path lay around the perimeter of the garden.  Each bed was devoted to a single crop: garlic (2 beds), dill, onion, shallot, leek, chervil, celery, chard, cabbage, lettuce, love in a mist, coriander, poppies, parsnip, parsley, radish, and summer savory.

The physic garden lay in the north eastern corner of the plan, next to the physicians house.  It was 28′ x 38′ and had 16 rectangular beds half as long and wide as those in the kitchen garden.   Each bed was devoted to a single kind of plant: costmary, cumin, Greek hay, fennel, iris purple flag, lily, lovage, mint, pennyroyal, watercress, rose, rosemary, rue, sage, summer savory, and black-eyed pea.  These herbs would have been used by the monastery’s doctor to treat the various maladies that were suffered by the monks.

In addition to the plants grown in the gardens within the monestery complex, there would have been fields of root crops and cereals as well as vineyards and additional orchards of fruit and nut trees.  These crops require a lot of space and would have been planted outside the walls of the monastery and are not shown in the plan.