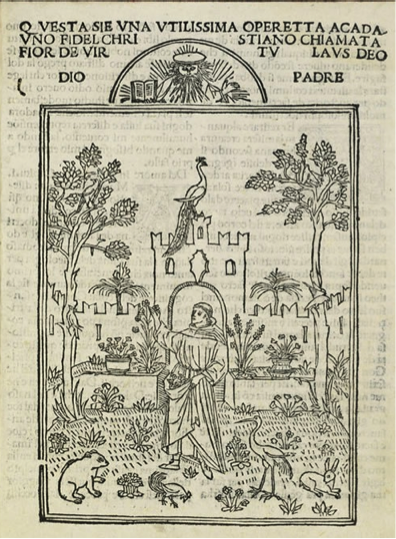 This woodcut of a monastic garden is the title page from a Florentine verison of  Il Fior de Virtu (Flower of  Virtue) dating from 1491 and drawn up by friar Tommaso.  The work is a colletion of texts  by various authors written between 1310 and 1335 and intended for edification and meditation.  Each  chapter is devoted to a discussion of a virtue or vice elucidated by pertinenet philosophical opnions and Bible verses.  The book was popular and had over 30 editions and was translated into many languages.

The garden is square or rectangular and has high walls that provide safety and privacy for study and mediation.  The style of the tower suggests that the scene is in northern Italy.  A grassy area is strewned with unidentifiable flowers and has at least two tall trees and raised beds where various plants grow both directly in the soil and in pots.  The friar appears to be gathering flowers perhaps for liturgical or devotional purposes but alternatively for medicinal ones. Most cloister gardens of this sort would have a fountain to symbolize life or knowledge and provide a source of water to facilitate the growth of the plants but perhaps the fountain is located where the viewer is supposed to be standing.

The animals are not usually part of a monastic garden and their presence is probably symbolic. The peacock perched on top of the tower may seem odd to the modern eye but its inclusion was based on a mistaken idea of the Greeks  that peacocks did not decompose after death so became a symbol of Christ and the resurection. The rooster may be associated with Peter’s denial of Christ and subsequent remorse so is a symbol of repentance. Herons were associated with Christ’s suffering because it was believed that they can shed tears.  Although rabbits and hares can be symbolic of conflicting values the likelihood is good that the meaning of the rabbits in this woodcut goes back to antiquity and represent vitality, rebirth, and the resurrection of Christ, as Easter bunnies do now.