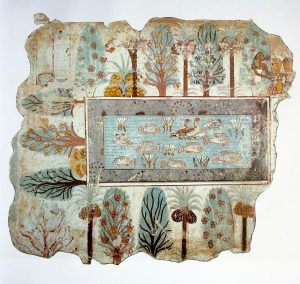 A wall painting from the Tomb-chapel of Nebamun in Thebes( present day Luxor), Egypt,  gives us a look at the kind of garden the ancient Egyptians enjoyed at the time.  Nebamun, lived about c 1350 BC during the 18th Dynasty in the New Kingdom.  He was a middle-ranking official scribe and grain counter at the temple complex in Thebes and this depiction of a garden for the after-life found in his timb proably represents the earthly pleasure gardens of wealthy Egyptians of the time.  Such pictures were intended to impress and entertain the family and friends of the desceased when they came to pay their respects and pray for his passage into the afterlife.

The picture shows a rectangular pool full of lotus flowers,  birds and fish surrounded by flowers and trees including fig, dom  palm, and date palm, this last with dates in different degrees of ripeness.  The trees would have provided much needed shade and the fish, birds, and date palm may have provided food for the table. The use of the garden for food goes back thousands of years to Predynastic times when vegetable gardens and fruit orchards were tended. 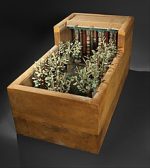 Other interesting features of Nebamun’s garden include the presence of  a goddess Nut who leans out of tree on the right of the pool and a fig tree on the left that greets Nebamun as the owner of the garden.  The garden was probably associated with a residence and had a wall around it as shown by the model of a similar garden found in the Tomb of Meket-Re inThebes, dating from 1700 BC.