No matter how beautiful the planting of trees, shrubs, and herbaceous plants may be, there is always room for ornaments. Water features are popular for sparkle, movement, sound, and coolness they add and fountains are often very decorative. Still, it seems that gardeners look for more. This is nothing new; the ancient Pompeians adorned their gardens with a variety of objects just like we do.

Sculpture, of course, was the most widely used ornament. Many fountains were sculptured figures or objects fitted with water yielding devices. A previous post showed fountains of two dogs and boar, Hercules and stag, and a boy holding a duck as well as a variety of urns and birdbath like structures. In addition to these sculptural fountains, statues of deities were popular. Some deities were considered more appropriate than others for the garden. Although Venus, was the deity most closely associated with the garden Athena, Priapus, Mars, Hercules, Bacchus, Faunus, Pomona, Apollo, Diana, and Cupid were also favored. Children/putti playing with animals, athletes, shepherds, and fishermen were also popular as were animal figures. Sometimes statues were placed so that they faced the garden, other times they were placed so that they faced one of the rooms surrounding the garden.

Many of the large gardens in Pompeii probably had herms, pillars with one or more sculpted heads at the top sometimes with carved feet or private parts. Adapted from a Greek model that featured the god Hermes, the Roman herm often featured the head of a famous person as well as popular deities such as Mars or Bacchus. The two headed herms might show the figure in youth and old age, or pair the heads of two individuals that were linked in mythology.

Another unique garden ornament was the pinax (pl. pinakes). This was a carved stone panel placed in a garden wall or mounted on a decorative piller. The Greek prototypes were made of wood but the ones in Pompeii were usually made of marble and had a thick raised border . Both sides of the panel were carved and usually had a Dionysiac theme. 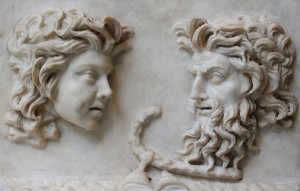 This wall painting shows us a herm with a pinax. 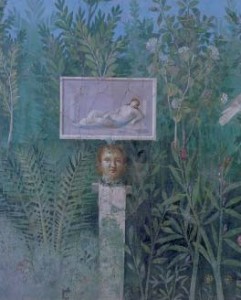 Oscilla (sing. oscillum) were suspended ornaments that were usually hung between columns with fresh garlands so they could swing in the breeze. They were made of marble, were about 12” across, and often depicted figures associated with Bacchic thiasos. They probably originated from the Greek custom of hanging trophies near shrines or in stoas. 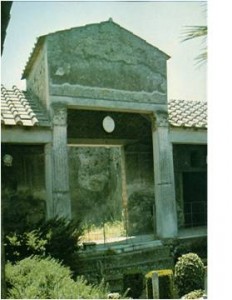 There were four basic types; circular (the most common), rectangular, shield (pelta)–shaped, and in the form of a theater mask. The first three are carved on both sides; mask forms were of the comedy and tragedy type and could be male or female. They featured large mouths and eyes.


The garden was a very good place to have a sundial and over 30 have been found in Pompeii. They were carved from a block of stone and mounted on a sturdy base.

An epigram attributed to a Trajan gives you a good idea of their appearance. “If you put your nose pointing to the sun and open your mouth wide, you will show all passersby the time of day.” In spite of their popularity, or perhaps because of it, the sundials in Pompeii were not very accurate because they were not calibrated for Pompeii.

The elegant gardens of Pompeii had a variety of ornaments. For example, the ornaments in the garden of the House of the Golden Cupids included: