In the early days of Pompeii, the grand houses of the wealthy residents did not have an easy source of water and the gardens in the center of the houses were planted with trees rather than shrubs or herbaceous plants because the trees only need one year of watering to become established. Once the aqueduct was built to bring water to the town, the residents could have water come right to their houses and gardens, presenting new opportunities. In addition to more varied plantings, pools and fountains became possible and many residents took advantage of this opportunity.

Pools were often built in the center of the peristyle garden as a focal point. They varied in shape, size, and depth. Some pools had jets. Others were painted inside with blue or with aquatic plants, fish and other sea creatures. These pools still survive in Pompeii and suggest the variety of shapes employed. 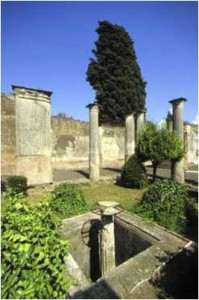 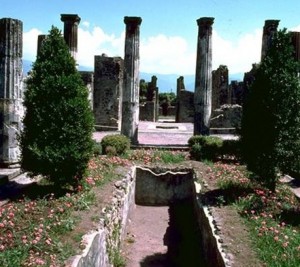 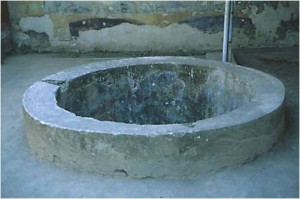 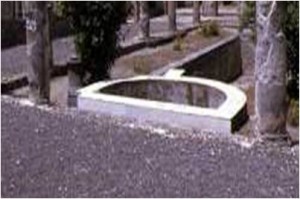 Rectangular with niches; note the stairs that created a little cascade as the water from a fountain fell into the pool: 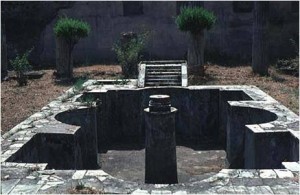 Sometimes pools were interconnected to form an eripus: 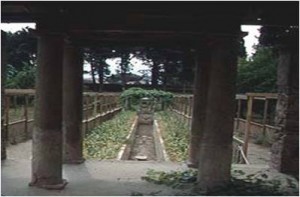 In addition to pools, gardens often contained fountains. There were many different kinds from simple to elaborate, beautiful to gory. Here are three simple ones that have survived. 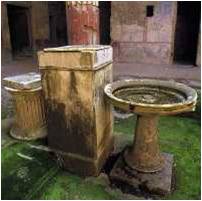 Fountains were made of various materials such as marble and bronze and were very popular. This boy with a duck from the House of the Vettei was one in a series of children sculptures. The water came out of the duck’s mouth. 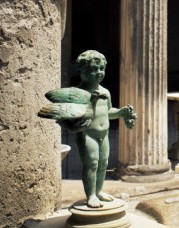 The Romans loved hunting and the chase and this is reflected in their choice of fountains. Here Hercules kills a stag. 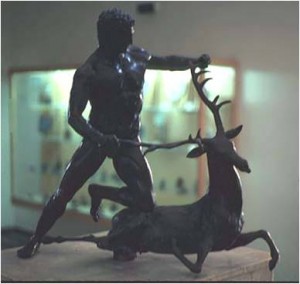 Two dogs attack a wild boar. This group was inspired by a Hellenistic animal sculpture and stood on a semi-circular fountain base with a snake, lion, and deer. Water came out of the mouth of the boar, and the mouth of the dog on the right trying to bite the boar’s leg.

A few gardens had a nymphaeum on the rear wall of the garden where it could be seen and appreciated by all. They were derived from the Greek notion of a grotto where numphs congregated. In Pompeii they were often encrusted with plaster or mosaics of glass paste and shells. 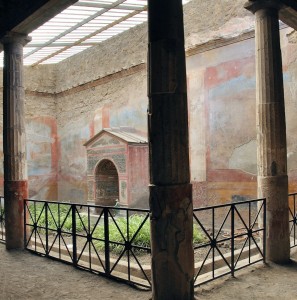 Water spilled into the pool from a mask or fountain. The stairs created a little cascade of water. 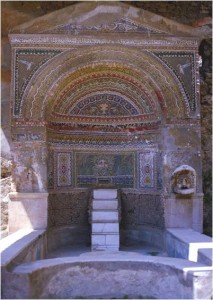 In the hot dry climate of Italy a water feature in the garden was especially appreciated. Not only could visitors visually enjoy the water, but they could dip their hands in the pools, or enjoy the cooling effect of the mist as the fountains flowed. The flowing water sparkled in the sun, gave life to the garden and brought pleasant sounds to the ears of visitors as they ambled along in the shade of the colonnade. The variety of fountains and pools attests to the importance that the Romans ascribed to water features in the garden.