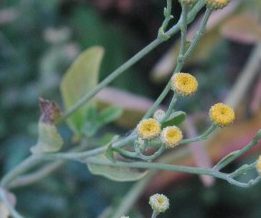 Costmary is a herbaceous perennial native to the Mediterranean and also known as alecost, balsam herb, bible leaf, and mint geranium. It is one of 16 herbs recommented  in the 9th century plan for the physics garden of the St. Gall Benedictine abbey in Switzerland, one of the 23 plant included in Walahfrid Strabos Hortulus garden, an one of the many plants suggested for the gardens in Charlemagne’s gardens.  Although popular in England after the 16th century and brought to North American by the colonists the herb is now rarely seen in Europe or North America although it is popular in southwest Asia.

Costmary has been used to treat a variety of conditions.  Two of the most surprising ones are  menstrual cramps and  pain in childbirth, considering that the garden where there is evidence for the herb was a monastery of men. Strabo says that costmary root helps digestion and eases constipation. Other more gender-neutral uses associated with costmary are the treatment of ulcers, liver disorders, ague, melancholy, hysteria, mild burns, gout, bee stings, bruises, blisters, colds, gall bladder disease, catarrh, and dysentry.

In addition to its medicinal uses, costmary was grown as a culinary herb to flavor beverages and was used in beer making before hops was known.  Literary evience suggests that it was  used as a bookmark in Bibles and prayer books and was widely grown in Elizabethan knot gardens.  More modern uses include the use of the leaves to flavor could soups and fruit salads.

The plant grows up to 6.6′ tall and has oval gray-green leaves with serrated margins and two small lobes at the base of some leaves.  Lower leaves are up to 12″ long while upper ones are 1.5-5″ long.  They dry well and have a eucalyptus fragrance.  In late  summer, loose terminal clusters of yellow button-like  flowerheads appear that are 1.2″ across.

Plants thrive in full sun and tolerate shade although produce less flowers.  They like average, medium moist, well-drained soil but tolerate less.  Healthy and hardy in USDA Hardiness Zones 5-9, the plants produce little seed but can be divided in spring.

The genus name, Tanacetum, comes from the Greek word athenasia, meaning immortality because of its use in funeral winding sheets to discourage worms.  The specific epithet, balsamita, is from the Latin word balsamum,  referring to the resinous gum of the balsam tree, and by extension  to the fragrant leaves of this plant.