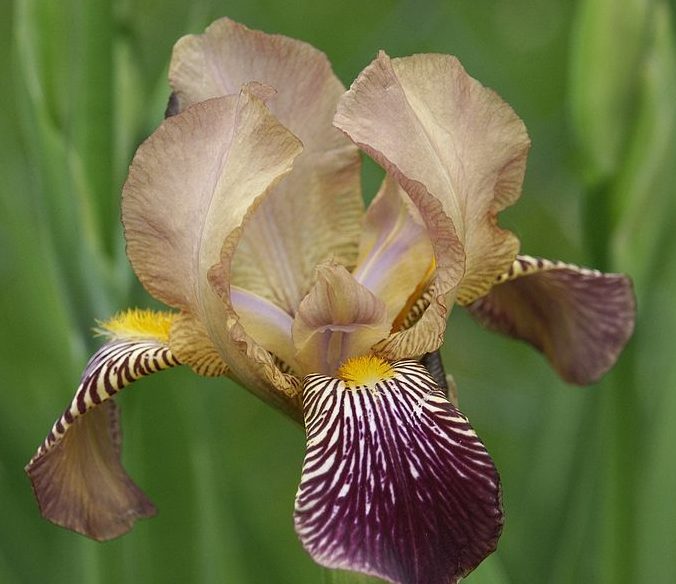 Also known as bearded iris and common flag, this herbaceous perennial is native to the eastern Mediterranean and may be a natural hybrid between Iris pallida and Iris variegata.  It is best known by its multitude of cultivars that exhibit great variety height of plant and color and size of flowers.   Although no medicinal properties of German iris are recognized in modern times, the plant was one of  16 herbs recommented  in the 9th century plan for the physics garden of the St. Gall Benedictine abbey in Switzerland, one of the many plants recommended for the gardens of Charlemagne, and one of 23 plants  in Walahfrid  Strabo’s list of herbs for his garden that may have been a physics garden.  Photo Credit:  Bernd Haynold Wikipedia

Strabo mentions that dried, pulverized iris roots in wine are good for bladder pain and may also be used to stiffen linen cloth and make it smell sweet.  The second part of this comment about smelling sweet opens the possibility that the iris Strabo had in mind was I. germanica var. florentina.  This variety was known to ancient Egyptians and Greeks who noticed the pleasing fragrance of the dried root and used both the root powder and juice as a cathartic and diuretic, and to treat convulsions, coughs, upset stomachs, bites, and “saucie face” (acne).  The plant was cultivated commerically for orris root in Florence during the Middle Ages and used for perfume making as it is today.

Plants grow from creeping rhizomes  that may for large clumps and may be less than 8″ or up to 38″ tall.  The leaves are sword shaped and mostly basal.  Up to six flowers appear in the spring on flowering stalks and consist of three upright petals called standards, and three dropping petals called falls that display a beard.  The wild form of german iris has lilac standards and purple falls with white bases, brown veins and yellow beards but cultivars display a wide range of blues, purples, yellows, and pinks for all flower parts.  Some flowers are fragrant and some plants rebloom in the fall.

German iris like average, moderately moist, well-drained soil in full sun in USDA Hardiness zones 5-9. Plant should be deadheaded as the flowers fade and flowering stalks removed after blooming.   They can be propagated by seed or division after flowering and are susceptible to iris borer, bacterial soft rot, crown rot fungus, fungal leaf spot, and mosaic virus.

The genus name, Iris, honors the Greek goddess of the rainbow due to the huge variation in flower color.  The specific epithet, geranica, refers to one of the man places the plant has naturalized.