Plants of the Bible: Tarthuth aka Juniper Roots (Cynomorium coccineum) 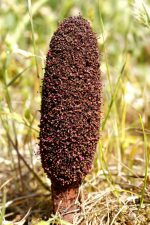 Also known as Maltese fungus, Maltese mushroom, desert thumb, red thumb, and tarthuth, this perennial plant is not a fungus or even closely related to fungi.  It is a flowering plant in a plant family by itself, Cynomoriaceae, and in an order that includes witch hazel, stonecrop, and peony.   Tarthuth is native to the Mediterrean region where it grows as a parasite on salt tolerant plants. It lives most of its life as a rhizome underground attached to the roots of the host plant.  In spring  the rhizome produces above a fleshy, unbranched stem with scale-like leaves and a dark red to purple phallic-shaped structure up to 12″ long bearing tiny scarlet flowers that may be male, female, or both.  Once the flowers are fertilized by flies attracted to the sweet ordor of the plant, the structure turns black and small nuts are formed.  The stem of the parasite is considered a famine food but is valued more for its medicinal qualities.  Photo Credit Wikimedia Commons

Bible scolars have identified the the plant called Juniper’s roots as being tarthuth but this identification is far from certain and rests on the similariies of Hebrew, Arab, and Moorish words for the identification of the host shrub, bridal veil broon (Retama monosperma).  This host shrub is native to North Africa, the Levant and some parts of southern Europe, and forms large plants with white flowers in Palestine and Syria.  Although the shrub is relatively valuable for shade it contains cytisine, a toxic alkaloid, so is not a good food source. Turthuth, however, growing as a parasite on its roots, has a stem known for its pleasant, crisp texture and apple-like astringency.

Turthuth can only grow as a parasite on another plants and is usually found with saline tolerant plants in dry warm climates including deserts.

The genus name, Cynomorium, is derived from the Greek words kynos meaning dog, and morion  meaning penis,  refers to its shape.  The specific epithet,  coccineum, is the Latin word for scarlet and refers to the color of the flowers.