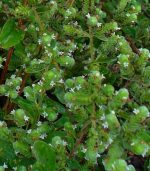 A native of North Africa and Southwest Asia, marjoram is a tender perennial and a member of the mint family, Labiatae, that also includes basil, rosemary and beebalm.   Plants form upright mounts 1-2′ tall and have a shallow root system and a well branched square stem.  The ovate leaves are pale gray green, 1/4-1″ long, and have a spicy scent.  The tiny white to pale pink flowers are tubular, two-lipped, and appear in spherical clusters of three to five from mid to late summer.  Marjoram is hardy in zones 9-10 so is often grown as an annual. It likes full sun, and average, dry to medium moist, well-drained soil, and tolerates heat and drought well. Propagation is by seed that is small and slow to germinate.  The genus name, Origanum, comes from the Greek words oros meaning mountain and ganos meaning joy suggesting their admiration for a plant that grew wild on the mountainsides.  The specific epithet, majorana, has an uncertain origin but might be from the Latin word maior meaning greater.

Sweet marjoram is closely related to oregano but has a milder flavor and historically has been used more in cooking while oregano with its stronger flavor has been used in traditionally used more in medicine.  In Ancient times the Greeks and Roman associated the plant with Aphrodite/Venus and was used in wreaths and garlands at weddings and funeral.  A girl anointed with marjoram would dream of her future spouse. During the Middle Ages it was used as a strewing herb and in nosegays to overcome the foul odors that were part of everyday life.  Although used to cure or ameliorate a variety of ills from indigestion to conjunctivitis and toothache, it gained prominence in the cuisines of Italy, Portugal , and France and is usually one of the herbs included in the herbes de Provence along with savory,  oregano, rosemary, and thyme,  a mixture that is good in stew as well as with grilled fish and meat.