Plants of the Bible: Almond (Prunus amygdalus aka Prunus dulcis aka Amygdalus communis) 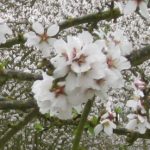 Almonds are deciduous trees native to the Indian subcontinent,  North Africa, and the Middle East including Syria and Palestine.  The upright tree grows 25-40′ tall and has wide spreading branches and rough gray bark. The bright green leaves are simple and 3-5″ long. The white to pale pink flowers are 1-2″ across and have 5 petals. They appear singly or in pairs in spring before the leaves emerge and give way to oblong, brown fruits, 1 ½ inches long.

The almond appears in 9 verses of  the Bible all in the Old Testament:

Genesis 30:37 Jacob follows the dictates of some ancient folklore:

“Then Jacob took fresh rods of poplar and almond and plane, and peeled white streaks in them, exposing the white of the rods.”

Genesis 43.11 Jacob orders his sons to take prized foods as presents to Joseph in Egypt.

“Then their father Israel said to them, “If it must be, then do this: Put some of the best products of the land in your bags and take them down to the man as a gift—a little balm and a little honey, some spices and myrrh, some pistachio nuts and almonds.”

25:34  “On the lampstand itself there shall be four cups shaped like almond blossoms, each with its calyxes and petals.”

37:20  “On the lampstand itself there were four cups shaped like almond blossoms, each with its calyxes and petals.”

Numbers 17.8 Moses placed 12 staffs one for each tribe, in the tent of the covenant law.

“ The next day Moses entered the tent and saw that Aaron’s staff, which represented the tribe of Levi, had not only sprouted but had budded, blossomed and produced almonds.

Ecclesiastes 12:5   Because  the almond tree blooms in winter before the leaves appear it was considered a symbol of old age.  Here an almond tree in full bloom is compared to the white hair of old age.

“when one is afraid of heights, and terrors are in the road; the almond tree blossoms, the grasshopper drags itself along and desire fails; because all must go to their eternal home, and the mourners will go about the streets;”

Jeremiah 1:11 The banch of almond may represent the idea of acting promptly.

“The word of the Lord came to me, saying, “Jeremiah, what do you see?” And I said, “I see a branch of an almond tree.”