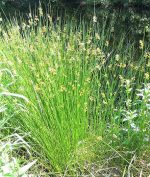 Also known as soft rush and mat rush, this herbaceous perennial is a member of the rush family, Juncaceae, that includes plants  resembling sedges and grasses.  Common rush is native to Europe, Asia, Africa, North American and South America where it is found in wet areas such a marshes, bogs, ditches, wet pastures, and along streams. The plants grow 2-4′ tall and form spreading clumps that  may be considered invasive. The grass-like, green stems are soft, smooth, solid, and unjointed.  Leaves are reduced to sheaths at the base of the stems.    From July to September inconspicuous, scaly, yellowish green to brown flowers appear in spikey clusters on one side of the stem near the tip, and give way to an an obovoid capsule. Photo Credit Meegar Wikipedia

Several passages in the Bible refer to a low growing nutritious marshy grass or grass-like plant that is likely to be a species of rush or bulrush.  There are 15 kinds of bulrush (Scirpus) and 21 kinds of rush (Juncus) in the Holy Land.  Of these, the common soft or bog rush (Juncus effusus) is the most likely to be the plant intended.  It is common in wet places throughout the area including the Sinai and other deserts. Various Hebrew words are used in the Bible to suggest a rush or bulrush and are translated in various ways including reed, marsh grass, reed grass, meadow,  bulrush, rush, flag and sedge.

“when out of the river there came up seven cows, sleek and fat, and they grazed among the reeds.”

Job 8:11 (NKJV) Bildad applies the rule of cause and effect to Job’s situation.

“Can the papyrus grow up without a marsh? Can the reeds flourish without water?”

Isaiah 9:14 (NIV) The prophet predicts that God will overthrow the leadership because the people will not repent.

“So the LORD will cut off from Israel both head and tail, both palm branch and reed in a single day;”

“The rivers will turn foul; The brooks of defense will be emptied and dried up; The reeds and rushes will wither.”

Isaiah 19:15 (KJV)  When God strikes Egypt there will be cruel rulers with foolish counselors and hardships will result.

“Neither shall there be any work for Egypt, which the head or tail, branch or rush, may do.”

Common rush likes full sun and wet soil including standing water up to 4″ deep, in USDA Hardiness Zones 4-9. Plants are generally healthy but susceptible to damage by rust, leaf spot and stem rots.  Propagation is by division of rhizomes or seed.  Common rush provides spawning area for fish, and food and shelter for for birds and mammals especially muskrats.  It  is a good choice for a wetland, bog, or wildlife garden.