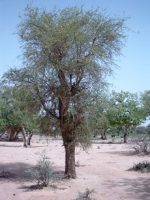 Egyptian balsam is a shrub or small tree native to much of Africa and parts of the the Middle East where it grows in arid and sub-arid tropics and subtropics including savannas, deciduous bushlands, along watercourses , in woodlands, and on seasonally inundated plains.  It is also known by many common names including desert date, soap berry tree, Thron tree, Jericho balsam, and simple thorned torchwood, and is a member of the caltrop family, Zygophyllaceae, that also includes  the creosote bush (Larrea tridentata).  The plant grows up to 33′ tall and has a fluted trunk with grayish-brown fissured bark that sheds to reveal yellow-green patches.  The many branches bear long, straight, spirally arranged, green spines that give rise a their base to dark green, leathery, compound leaves with two leaflets.   The plant is evergreen when conditions are humid but usually sheds its leaves when moisture is lacking.  During the dry season tiny greenish-yellow flowers with 5 petals appear in clusters, either sessile or on short stalks, and produce an ellipsoid green fruit that is 1.6″ long,  ripens to brown or tan, and has a brittle skin, brown-green sticky pulp, and a  hard center stone. Photo Credit WikipediaEvidence indicates that Egyptian balsam was cultivated and used in Egypt for 4000 years and the pits/stones of the fruit were found as votive offerings in the tombs from the 12th Dynasty, the apex of the Middle Kingdom.  The plant is common throughout Egypt and norther Africa, Palestine, the plains of  Jericho, and the plains bordering the Dead Sea.  Some authorities suggest that the balm mentioned in Genesis 37:25 is Pistacia lentiscus.  Note that no healing power is attributed to the balm in the Genesis passage, while the use of balm as medicine is important in the 3 Jeremiah passages.

Genesis 37:25 (NKJV) The sons of Jacob met together to discuss their plan to get rid of their father’s favorite son Joseph who they had cast into a pit.

“And they sat down to eat a meal. Then they lifted their eyes and looked, and there was a company of Ishmaelites, coming from Gilead with their camels, bearing spices, balm, and myrrh, on their way to carry them down to Egypt.”

“Is there no balm in Gilead, Is there no physician there? Why then is there no recovery For the health of the daughter of my people?”

Jeremiah 46:11 (NKJV)  Once Judah and Jerusalem were conquered and the land stabilized under Gedaliah, the Jews returned to their land.

“Go up to Gilead and take balm, O virgin, the daughter of Egypt; In vain you will use many medicines; You shall not be cured.”

Jeremiah 51:8 (NKJV) The vengeance of God against Babylon is described.

“Babylon has suddenly fallen and been destroyed. Wail for her! Take balm for her pain; Perhaps she may be healed.”

Egyptian balsam likes full sun and is hardy in USDA Hardiness zones 10-13.  It is very tolerant of a wide variety of soil types from sand to heavy clay, moist to dry, and relatively tolerant of flooding, livestock activity, and wildfire.   Propagation is by seed and division of suckers.  Plants are susceptible to damage by locusts, beetles, leaf galls, scale, borers, Bunaea alcinoe,  Phoma balanies, Septoria balanitis  The fruits, leaves, flowers and branches are highly valued in Africa for subsistence living food, medicinal products, and fuel-wood.  The thorns are used for tattooing and the thorny nature of the plant makes it a good choice for hedges.

The genus name Balanites, is from the Greek word balanitēs  meaning acorn-shaped and refers to the fruit.  The specific epithet, aegyptiaca, is the Latinized form of Egypt, and refers to the place where the first specimen plants were found and described.