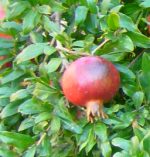 A native Iran and Iraq, the pomegranate is a deciduous tree or shrub that has been grown since ancient times and  is widely cultivated for the juicy seeds of its fruit in warm dry areas of Asia, Middle East, Africa, Europe, and South America.  Growing up to 33′ tall the plants have fine-textured leaves that are glossy green and narrow oblong. Showy red-orange  flowers  are borne singly or in clusters of up to five from late spring to early summer. In the fall, the foliage takes on a reddish or bright yellow tint as the large almost spherical fruits appear. The fruits are 2 to 4.” across and  have a tough, leathery, pink to red skin and an interior divided into hundreds of segments by thick, cream-colored membranes. The segments are  filled with a seed surrounded by a sac of tart juice.   The plants are are extremely long-lived, up to 200 years old, and are grown as ornamentals as well as for fruit.

The pommegranate is mentioned many times in the Bible and in  different contexts.  With a high content of vitamin C, vitamin K, folate, an dietary fibret, the seeds symbolized abundance, properity, and financial and material wealth.  Pomgranates also represented fertility and love because of the abundance of the seed that spilled forth from the fruit when opened.  The attractive fruit was also seen as a beautiful adornment for architecture.

Deuteronomy 8.8 (NIV)  God tells the Israelites about the land that God is giving them.

“a land with wheat and barley, vines and fig trees, pomegranates, olive oil and honey; ”

Exodus 28 (NIV) God describes to Moses the robe for the high priest, Aaron.

Numbers 13:23 (NIV) The 12 Israelite spies bring back some specimens from the reconnaissance trip into the Promised Land.

“When they reached the Valley of Eshkol, they cut off a branch bearing a single cluster of grapes. Two of them carried it on a pole between them, along with some pomegranates and figs.”

1 Samuel 14.2 (NIV) Jonathan, son of Saul,  encouraged his men to go over to the Philistines’ outpost in preparation for an attack while his father waited unaware of what he was doing.

“ Saul was staying on the outskirts of Gibeah under a pomegranate tree in Migron. With him were about six hundred men, “

Song of Songs Also called the Song of Solomon, and Canticle of Canticles, this poem is about the spiritual and sexual love between one man and one woman and describes courtship and marriage customs of the times.  Although it is sensual it is also interpreted in religious terms as the relationship between God and Israel, or as an allegory of Christ and his bride, the Church.

4.3  (NIV) The bridgroom describes the beauty of his beloved.

“Your lips are like a scarlet ribbon; your mouth is lovely. Your temples behind your veil are like the halves of a pomegranate. “

4: 13  (NIV) The bridgroom describes the garden of his beloved.

“Your plants are an orchard of pomegranates with choice fruits, with henna and nard,”

6.7  (NIV) The bridgroom again uses the pompranate to describe his beloved’s cheeks.

“Your temples behind your veil are like the halves of a pomegranate. “

6.11 (NIV) The bridegroom describes his surroundings.

“I went down to the grove of nut trees to look at the new growth in the valley, to see if the vines had budded or the pomegranates were in bloom. “

7.12 (NIV) The bride suggests a trsyt in the countryside.

“Let us go early to the vineyards to see if the vines have budded, if their blossoms have opened, and if the pomegranates are in bloom— there I will give you my love. “

8.2 (NIV)  The bride wants to bring the bridgroom to her home.

“ I would lead you and bring you to my mother’s house— she who has taught me. I would give you spiced wine to drink, the nectar of my pomegranates. “

Jeremiah 52 Pomgranate sculptures were part of the plunder carried off to Babylon when the temple was destroyed in the fall of Jerusalem.

22 The bronze capital on top of one pillar was five cubits high and was decorated with a network and pomegranates of bronze all around. The other pillar, with its pomegranates, was similar.
23 There were ninety-six pomegranates on the sides; the total number of pomegranates above the surrounding network was a hundred.

1 Kings 7:20 (NIV)  The capitals and pillars were later used in Solomon’s temple.

“ On the capitals of both pillars, above the bowl-shaped part next to the network, were the two hundred pomegranates in rows all around. “

Joel 1.12 (NIV)  The devastation caused by a locust plague and drought is described.

“ The vine is dried up and the fig tree is withered; the pomegranate, the palm and the apple tree— all the trees of the field—are dried up. Surely the people’s joy is withered away.”

Haggai 2.19 Haggai prophesizes that now that the Jews are obedient, God will bless them, though there is no sign of fertility yet.

“ Is there yet any seed left in the barn? Until now, the vine and the fig tree, the pomegranate and the olive tree have not borne fruit. “ ‘From this day on I will bless you.’ ”

Pomegranate likes full sun, and deep, loamy, moderately moist, well-drained soil in USDA Hardiness zones 7-10 although it will not bear fruit in the cooler parts of its range.  It is susceptible to aphids, citrus flat mite, leaf-footed bug, omnivorous leaf roller,  Alternaria fruit rot, Aspergillus fruit rot, and gray mold.  Propagation is by seed, hardwood cuttings, layering, and grafting.  Over 500 cultivars are available.