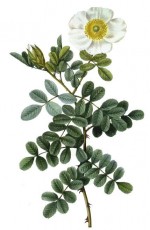 Roses have been grown for seventy million years in Asia and thirty five million years in North America. Today there are over one fifty different species of rose and thousands of cultivars. Over the years, they have been grown to make perfume, medicinal products, and cosmetics, to flavor food, and as cut flowers and ornamental garden plants. Roses are valued for their form, color, and fragrance, and have been a symbol political allegiance as well as love. It is no wonder that roses have been absorbed into the art of many cultures during many different time periods and this series of articles will explore some of the many examples of roses in art.The first evidence of roses in North America dates back about thirty five million years ago to a fossil thought to be Rosa nutkana, that forms thicket in moist soils and full to partial shade. It has light green leaves and fragrant pink single flowers two to three inches across in early summer. 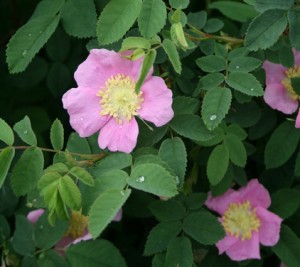 Cuneiform tablets from Mesopotamia indicate that Sargon I, King of the Akkadians (2684-2630 BC) knew of roses but their first appearance in art is in Minoan frescoes from the palace at Knossos on the island of Crete, dating to circa 1700 BC. The single roses have five pink petals. 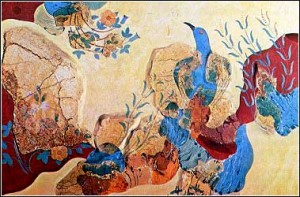 Many ancient Greek poets mention roses: Homer says that Aphrodite used rose water to wash Hector’s body after he was slain by Achilles while Sappho from Lesbos called the rose the Queen of flowers. 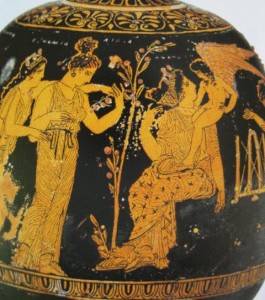 The ancient Romans were very fond of roses and often depicted them in wall paintings like this one from first century Pompeii. The roses shown in the wall painting look very similar to Rosa mund, said to have originated in 1581 and originally called Rosamunde after the mistress of Henry II, who ruled England from 1154-1189. 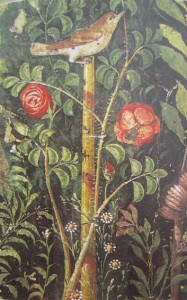 Roses were often painted or carved on ceilings and were associated with secrecy hence the epression “sub rosa” (meaning under the rose) came to signify a confidentiality. 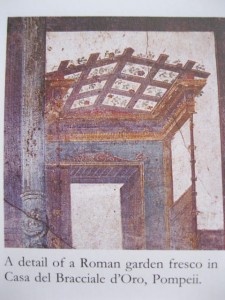 Romans used garlands extensively; in the peristyles of their houses between columns as shown in this wall painting as well as in the public market place or any other place they felt could be enhanced by them.

Many different kinds of flowers were used in garlands but the rose was the most popular with Madonna lily and violeT (probably stock)being the most popular, in that order). Other lfowers used in garlands were gnenista, oleanders, blue bachelor’s button, cockscomb, cyclamen, and pot marigolds. Ivy, variagated and plain, and ruscus were favorite greens. We don’t know how the garlands were put together because it was so common that Pliny, our source, did not bother to explain it, but it probably involved a weaving technique. 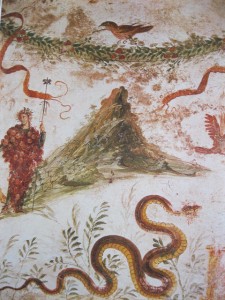 In the House of the Vettii; in Pompeii, a wall painting shows us the process of garlands making. First the flowers are picked . 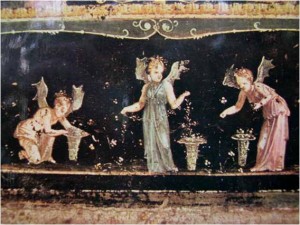 Then a gardener brings the flowers to market on the back of a goat while a small boy with a basket full of flowers trudges behind.

Cupids make the garlands in a workshop.

Unfortunately this part of the wall painting is in such bad condition that we have to rely on a sketch to see the details. 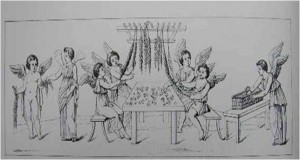 In the same house another wall painting show us cupids making perfume. The area around Pompeii was famous for its perfume made from roses.Here olive oil is heated and stirred, then other ingredients are added, and the finished product is ready for sale. The woman on the red pillow tests a sample on the back of her hand. Roses were also used in a variety of medicines such as a salve for he eyes but we have no pictures relating that use. 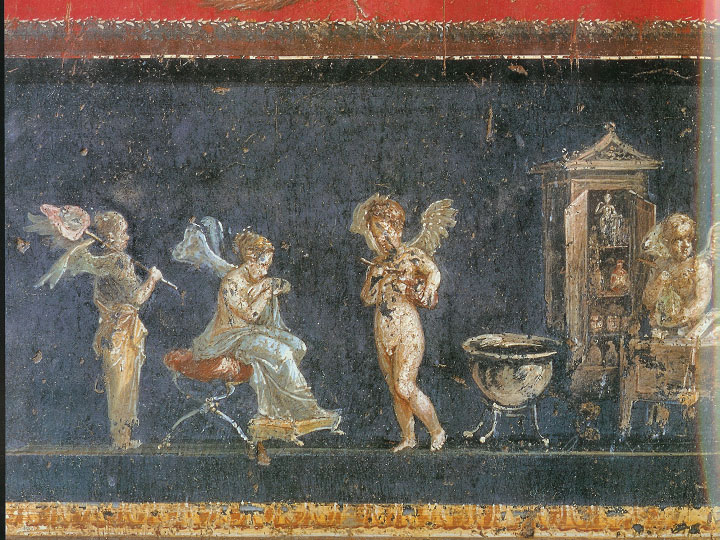 The nineteenth century Dutch artist, Alma-Tadema, depicts the third century AD emperor Heliogabalus, trying to smother his guests with rose petals falling from panels in a false ceiling. Nero, emperor in the first century AD, is said to have done the same thing((Suetonius, Nero, xxxi), and the ancient Roman writer Petronius says that there was such a ceiling in Trimilchos’ house. 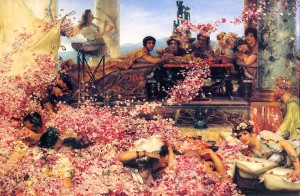 The same Dutch painter depicts Cleopatra as she greets Marc Anthony with an room full of roses. She did this so that whenever Anthony smelt a rose he would be reminded of her. 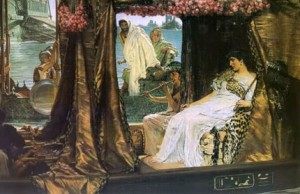 The Romans had such a huge demand for roses that they imported them from the Nile Delta where they were used in burial rites. The Egyptian rose is thought to be Rosa x richardii formerly known as Rosa sancta. No one knows how the roses survived the twenty day journey from Egypt to Rome. 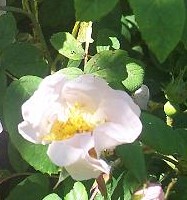