The Goddess Flora and her Garden 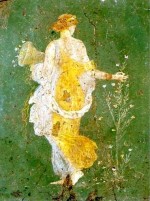 Flora was an ancient Italian diety and was the goddess of the flowers and mother of spring. She may be recognized in art by a garland of flowers on her head and/or a bunch of flowers in her hand.  The Romans celebrated the Floralia, honoring Flora and the renewal of life in late April to early May every year by adorning the temples with flowers, making offerings of milk and honey, and wearing colorful clothing. This holiday was especially popular with courtesans, suggesting sexual overtones in the celebration.

The ancient Roman poet, Ovid, identifies her with the Greek god Chloris, wife of Zephyrus, the west wind that commonly blows in the spring. In his painting La Primavera, the Italian Renaissance painter Botticelli shows us Chlois turning into Flora as Zephyrus pursues her while Venus, the Graces and Adonis stand to one side. 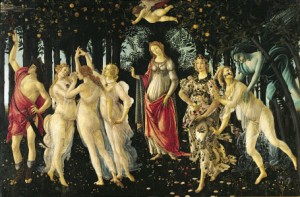 Zephyrus grabs Chloris as leaves are sprouting from her mouth.

Flora, the transformed Chloris wears her wreath and a dress adorned with flowers with the skirt pulled up and filled with flowers.

The story goes that Zephyrus fell in love (or lust) with Flora one spring day, kidnaped her, and eventually married her. 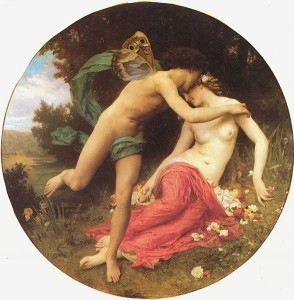 To prove his love Zephyrus allowed Flora to reign over all the flowers and cultivated fields. 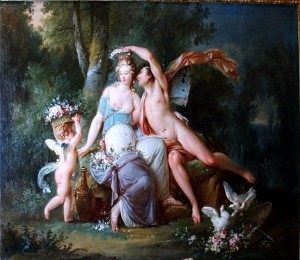 Flora had so many flowers in her garden she could not count them all. 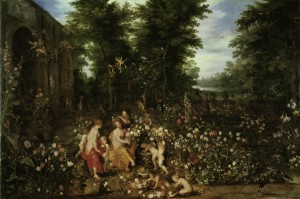 The Roman poet Ovid describes the garden of Flora in his Fasti, a work devoted to explaining the various Roman holidays. According to Ovid the companions that with Flora in her garden were all eventually transformed into flowers. The artist Poussin gives us an idea of what Ovid might have had in mind. 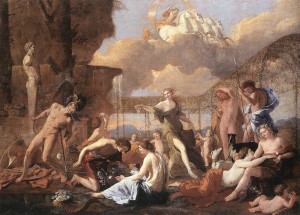 Flora sits in the middle in a green outfit sprinkling flowers about her while a group of putti dance behind her. 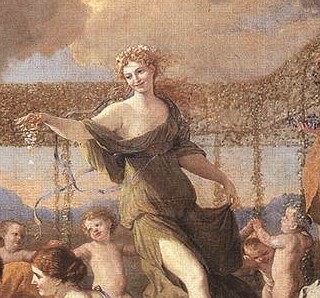 A herm, probably Priapus a god of fertility, stands on the left accompanied by baskets of flowers, suggesting the abundance of spring.

Apollo steers is chariot through the sky above. 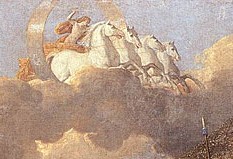 In front of the herm a man stands naked except for his helmet, impaled on a sword, recalling the tragic self inflicted death of Ajax during the Trojan War. The white carnation suggests his metamorphosis into a flower but not the purple hyacinth mentioned by Ovid.

To the right of Ajax is Clytie, a water nymph who pined away for the love of Apollo. She looks at Apollo in the sky above her with her left arm raised and she wears a yellow dress like the color of the sunflower (Helianthus) that she will become. As a sunflower she will always face the sun as she does at the moment. 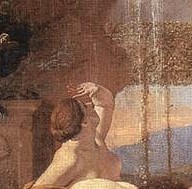 Echo and Narcissus are in front of Clytie. Echo pined away for Narcissus but Narcissus fell in love with his own image and turned into the flower that bears his name. (Echo turned into a rock.) 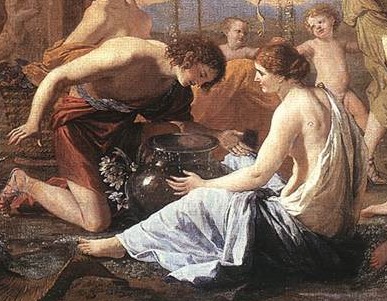 To the right of Flora stands Hyacinthus with his left arm raised. He was a lover of Apollo and either by Apollo’s mistake or the jealousy of Zephyrus was killed and became a hyacinth. Hum. According to Ovid Ajax became a hyacinth too so apparently Poussin used an artist’s license and had Ajax turn into a carnation as mentioned above. 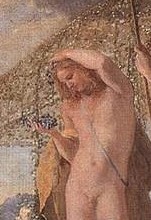 Adonis stands to the right of Hyacinthus holding a spear and rubbing his thigh where he has been wounded as he hunted with his two dogs. The wound proved to be lethal and Venus turned the blood of her lover into an anemones. 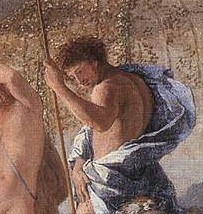 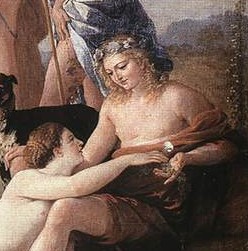 Other famous representations of Flora in art include Rembrandt’s portrait of his wife as Flora. 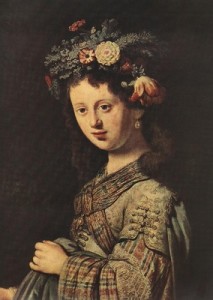 Flora also serves as an allegory in Titian’s portrait of a virtuous women entitled Flora. 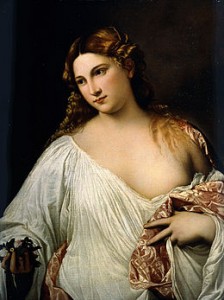 Flora seems to represent youth and the joy of living and was revered and celebrated in the world of ancient Rome and the Renaissance. We still love the flowers and spring with which she was associated but for their own sake rather than a representation of her beneficence. For those gardeners that take delight in mythology, however, her stories adds another layer of enjoyment to the garden.