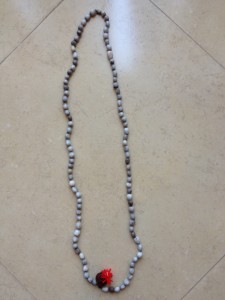 As we entered the foyer of the Lalit Hotel in Khajurho, India, we were welcomed by greeters who placed a necklace of gray beads around our neck. Made from the seeds of a tree growing in the forest of ‘Braj’, the necklace is actually a set of prayer beads used by Hindus and Buddhists. The Lalit Hotel offer the beads as a symbol of the love, peace, and inner strength they hope to bring to each visitor through the hospitality they provide.

The necklace is known as a mala (meaning garland in Sanskrit) and is used for keeping count while chanting, reciting, or mentally repeating a mantra so that the mind can focus on the mantra rather than counting. Mantras are often composed of a deity’s name and may be repeated hundreds or thousands of times. The mala has 108 similar beads each knotted in place, plus a large bead that marks the beginning and end of the mala. One repetition is said for each of the 108 beads, beginning at the large head bead and working around until the head bead is reached again. The mala is then turned and the procedure is repeated in the opposite direction. The mala is believed to be instrumental in connecting ones mind to the divine. While meditating the user of the mala may observe variance in energy levels; if the energy is low at the time of meditation, falling asleep may ensue while if energy is high, fantasies and distractions may occur. Gurus believe that friction between the fingers and thumb causes a subtle electric current in the mind which influences the heart and results in the highest level of concentration.

The vaijanti beads are associated with Lord Vishnu and his incarnation as King Rama. As King Rama, Lord Vishnu is believed to have given a garland of these seeds to his beautiful wife Sita. This mala was considered King Rama’s favorite accessory, and it is said to endow the bearer with colossal strength of mind and body. 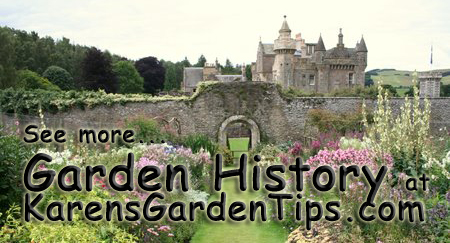