The month of April was gentle to the Piedmont of North Carolina where I live and brought ample rain and mild temperatures without the extremes that can characterize the month. All the plants rejoiced in their good luck and have been growing like never before. With virtually no frost damage this year, the trees and shrubs have been blooming and the roses got off to a good start, resulting in earlier bloom in the rose garden.

The beginning of April was welcomed by the pink flowering cherry tree on the edge of the iris bed. 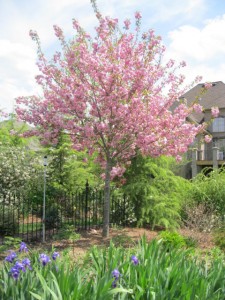 The pink flowering dogwood in the secret the garden was not far behind. This garden is sheltered and slightly warmer than elsewhere on the property and many plants seem to start early here. 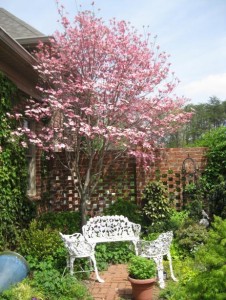 The role of the old fashioned bleeding hearts was slowly taken over by fringed bleeding heart, ajuga, and tiarella, with a little help from some Johnny jump-up planted in the fall. 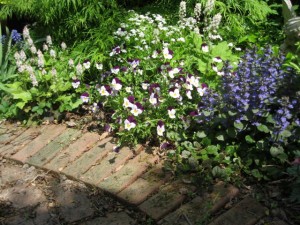 The variegated foliage of Soloman’s seal was complemented by the delicate green tipped flowers hanging from its slender stems. 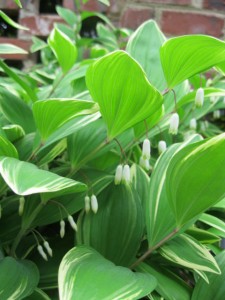 The rose Lady Banks bloomed with enthusiasm for two weeks.  It is a short and sweet display and will return for a year.http://www.karensgardentips.com/germany-dating-app/

Another profuse bloomer is Carolina jasmine.http://www.karensgardentips.com/best-picnic-foods-for-a-date/

The yellow flowers perfume the air and passing through the gate is always an olfactory treat.http://www.karensgardentips.com/interabled-dating-site/

In the shrub border, the snowball bush was boasting its green flower heads. The green flowers are prettier now than at any other time and I love to put them in flower arrangements.singles adventure holidays over 50s

Another shrub, cherry laurel, is an attractive evergreen plant that we grow for its foliage;http://www.karensgardentips.com/dating-jamaica/

but we get bonus at this time with its lovely display of fuzzy flowers. 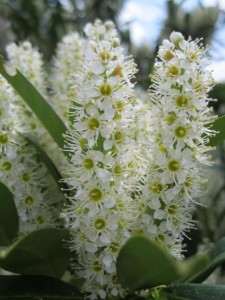 The big daffodil and narcissus display was over by mid April but early species tulips added color to the formal garden. 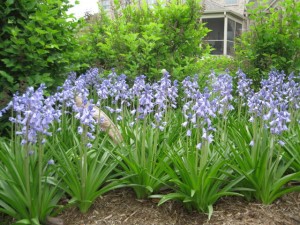 The Spanish broom, getting too large for the formal garden, burst into bloom with its pale yellow wands of flowers. It produces a gorgeous display in the garden and it’s branches are great in flower arrangements, especially in winter, but the large size of the plant is a problem. 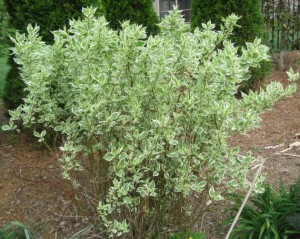 The euphorphia from a friend blooms with its unusual flowers. 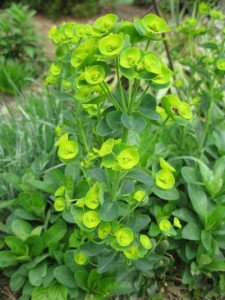 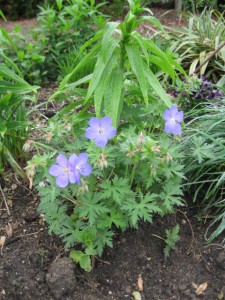 The white dogwoods and ‘Delaware Valley’ azalea put on a great display in the front of the house. 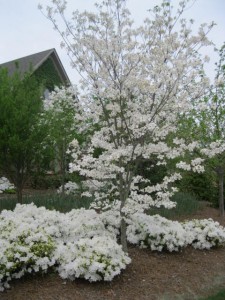 In another part of the garden the ground phlox (Phlox sublata) was blooming. These are tough plants! They grow in the hot sun with very little water or fertilizer and even spread under my benign neglect. 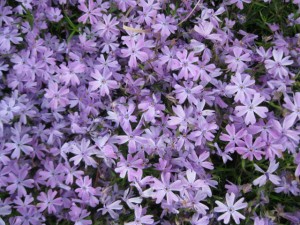 Another tough plant blooming in mid April is bridal wreath, Spirea vanhouttei. Neglect it, transplant it, forget you even grow it and it blooms every year with thousands of white flowers produced in flat clusters all over the bush. And it is a ‘wow’ in flower arrangements with its gracefully arched branches. 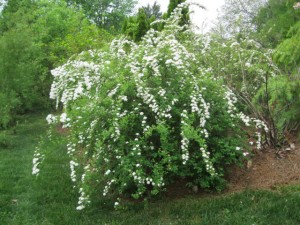 The perennials began blooming in the formal garden with coreopsis first, followed closely by… 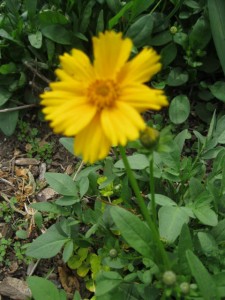 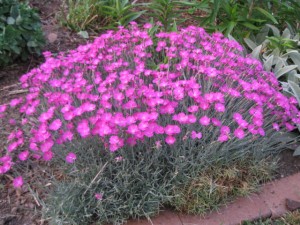 The most spectacular show was in the beds around the lily pool where the iris bloomed at the foot of roses climbing up an arbor. My favorite was ‘Sombreuil’ a climbing rose growing on the wall of the secret garden with a fragrance that is to die for. 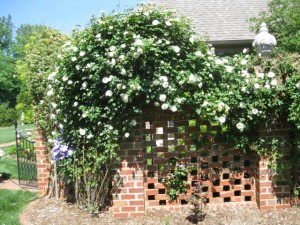 It brought out the best in the clematis growing at its feet.

To add the final touch to fragrance, the lilacs began blooming as the Spanish bluebells faded. Meanwhile, back at the tool shed, the head gardener and I planed and planted the vegetable garden, making sure that our crops were well rotated so that diseases and pests are kept at bay. We planted seed of radishes, beets, musclun, cucumber, summer squash, zucchini, and acorn squash, but bought seedlings of bell peppers, eggplant, and four varieties of tomatos. All seedlings and seeds are planted and the tomato cages have been set in place. A visit to the Farmers’ market resulted in the acquisition of a couple of flats of annuals. Yes, I lost two battles with impulse buying but they were not costly and on the whole I was restrained, at least in my own opinion. Now all I have to do is sit back, and enjoy the pleasure of having a wonderful garden with a big potential for lots of tasty vegetables.