Heat humidity and showers are still our constant companions. Sometimes we even have a deluge aggravating the root rot and blackspot problems that have plagued us for several weeks. He good news is that we are in mid August and soon the summer will be just a memory. This was a week of planting new hills of squash, zucchini, and cucumbers. I have not been very successful with second plantings of these warm weather crops but the local farmers and gardeners recommend it so I am going to try again and do it on time this year for a change (yes, I have been a bit early or late in the past). I have some squash hills from the first planting still producing but the bugs seem to get the squash before I do even though I pick it when thumb size. Oh well, I was getting tired of squash anyway and besides, I have lots of tomatoes now.

The very last bloom of the daylily ‘Pandy Bear’ faded this week. I was amazed at how long it bloomed. It had lots of buds and just bloomed away long after all the others had quit. It is one great daylily! 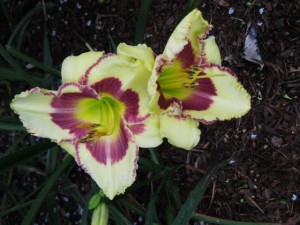 The allee of crape myrtles is getting quite lovely. The impatients have grown to a nice size and the white flowers of the overhead trees have been falling little by little creating a sort of fairyland. 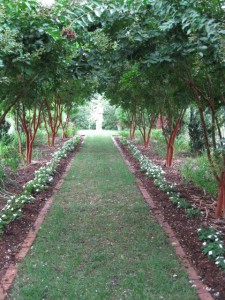 At the beginning of the allee is a bench with two dogs and pots of more white impatients so we can sit and enjoy the view and the shade overhead. 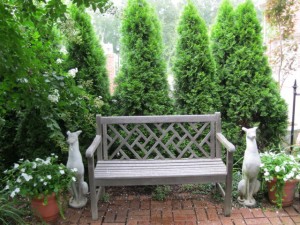 The crape myrtles have exfoliated most of their old bark and the cinnamon colored new bark is revealed in interesting patterns. 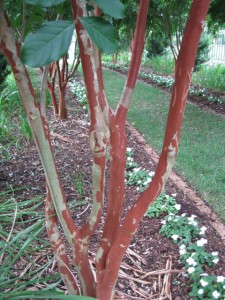 I have had very variable luck with containers this summer but a couple have been doing well and add a lot. I especially like this one on the wall under the pergola over the patio. It has no drainage hole and so whatever is planted there must like water and tolerate wet feet on occasion. The creeping jenny loves it and has grown long and lush. The impatient survives. 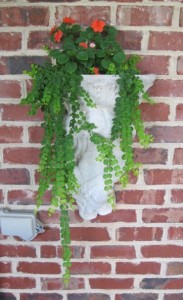 Complementary containers of impatients sit on the wall enclosing the patio. They get some sun but not enough to keep the impatience blooming like they should. The patio was in almost full sun until we planted some Japanese wisteria; need I say more? The wisteria very quickly covered the top of the pergola and shaded the patio more than we wanted so we have to hack it back at least once a month. 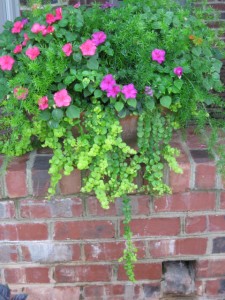 Purple basil fills one of the containers in the herb garden. I really grew it or the formal garden but it took so long to grow that I filled its space with something else and so decided to put it in a pot. I like the way it looks and have been eating it too. 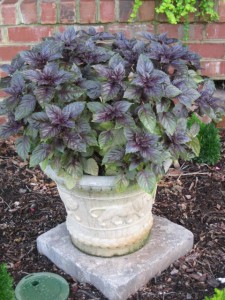 My most successful container was a strawberry pot filled with wax begonias. Not very original but the begonias filled in quickly and have created a very lush look. 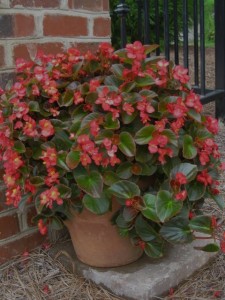 This canna, ‘Bengal Tiger’, is a special pet. I have had a terrible time with several different plants this year and I planted this one in a container just so I could keep an eye on it and give it extra care. I hope it is producing lots of new bulbs so I can increase my supply as the foliage is really a knock out. 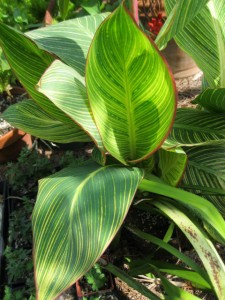 The flowers are quite attractive too but it is the foliage that I value the most. 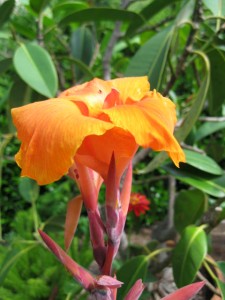 The moonvine in the rose garden has profited from the rain and heat; it has grown about 4’ to 8’6”!  (The rose ‘Casino’ is growing on the wall next to it.) 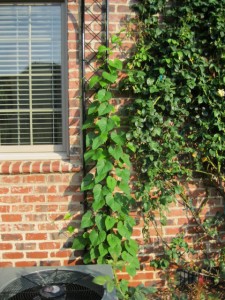 One of the more unusual roses is blooming, a tea rose called ‘Dr. Grill’. It has a hard time getting through the winter and the bush looks terrible in the spring. 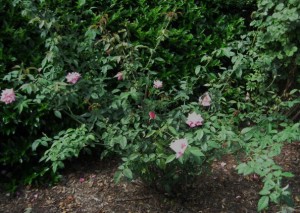 Its grows all summer and then when the heat comes basks in the sun and produces its very pretty flowers. The flowers are 2 tone pink and are composed of outer petals that curl back while inner petals curl over the center. 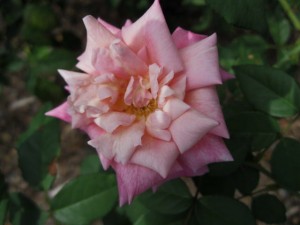 The hybrid musk ‘Belinda’ is finishing up. It bears large trusses of small flowers as it scampers over the garden wall. 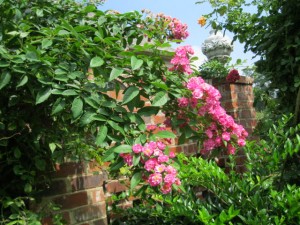 The flowers are dark bright pink fading to rose pink and white eyes with yellow stamens. The clusters of flowers with their long stems can be cut and used in arrangements. 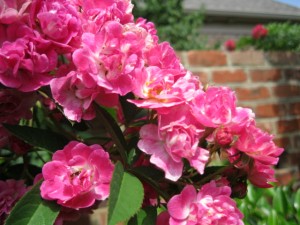 I wish the boxwoods that edge the rose garden were doing as well as most of the roses but they aren’t and we can’t figure out why. We found a wonderful boxwood nursery in Clemons, NC, so can replace the dead ones but it breaks my heart to watch them die. 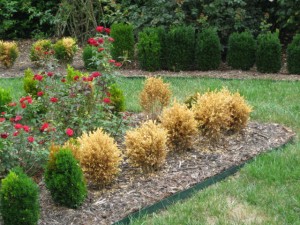 A standout in the secret garden in this small flowered clematis. I cut it way back, it bloomed in the spring, but then languished. Suddenly it sprang to life and is growing up the wall. 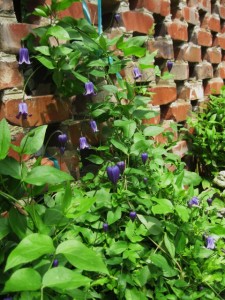 The buds are as pretty and interesting as the flowers. 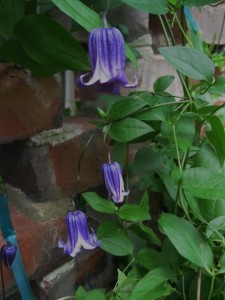 A volunteer nicotiana showed up recently too. I had several in different parts of the garden but only this one made it through the winter. 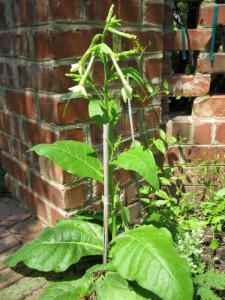 The pool garden has extensive beds of iris that are new this year but are going to be modified very shortly so that daylilies take over the job of blooming after the iris fade. Pink water lilies bloom in the pool, pink roses bloom on an arbor, and I carried through with the pink by planting pink begonias on the edge of the beds to provide continual color during the heat of the summer. The pink was a good choice but the begonias are having a hard time in parts and the edge looks ratty. I bought some extras for replacements but not enough. 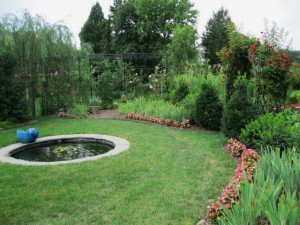 Zinnias in the formal garden are finally starting to bloom. I used them to fill in the spaces left by the yarrow after it bloomed and I cut it back. 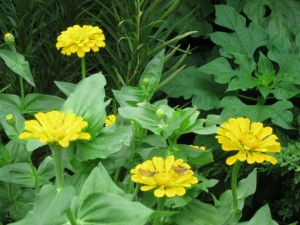 Some phlox flopped into the Sedum ‘Autumn Joy’ and found a handsome companion there. 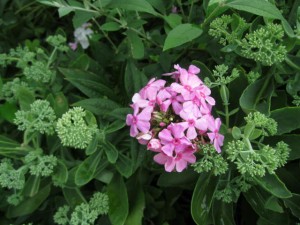 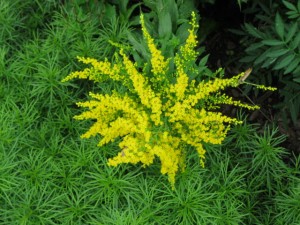 Miscanthus zebrinus has grown out of control this year and the head gardener has cut it way back and thinned it so the irrigation pipe could shoot its water across the garden as it is supposed to. The plant is very tall and vigorous and I planned to remove it this winter but now that it is blooming I am having second thoughts. 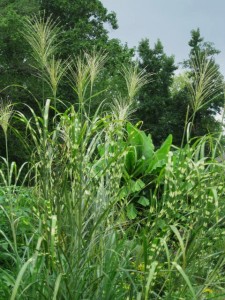 A buckeye graced me with her presence on the scabiosa. I still have lots of swallowtails both black and yellow, but the buckeyes only rarely visit so when one comes I consider I’m lucky. 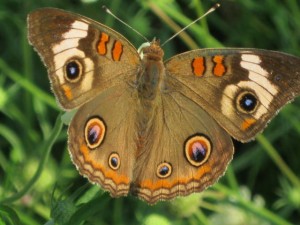 Next week I must get organized and plant the lettuce, radishes and beets; a little late, to be sure, but they seem to be a tolerant bunch.