Two days of normal temperatures and lower humidity and some heavy rain have brought a relief to the super high temperatures of the past weeks but more hot weather lies a head. The rain has been enough to cut off the irrigation for a while and that is good for some plants and the grass. The lawn is becoming a problem as larger and larger brown patches are developing. We can see the mycelium of the fungi glistening in the morning sunlight and have tried spraying but of course the spraying will not bring life back into the dead grass. The warm weather annuals, of course, are loving every minute of the hot sunny weather and evening downpours.

The big project this week was the installation of the new trellis that the head gardener has been working on. He designed and made a trellis for a wall of the house that forms one side of the rose garden. The trellis is fairly large and heavy so two people and some lumber were needed to set in into place. The head gardener set up the lumber so that he could lift the trellis in two stages to its place on the wall and your’s truly propped a long stick in it and made sure the stick stayed in place.

The head gardener had to drill holes into the brick and install the clamps that he had made for the project to hold the trellis in place.

The design mimics the window and large trellis to the left where the moon vine grows. 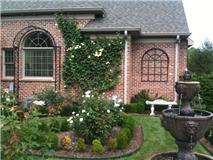 The moonvine is doing well now and growing steadily; about 4’ high this week.

The shrub rose ‘Marjorie Fair’s’ offering its large trusses of flowers this week as its second bloom of the season.

This rose is spectacular in the spring when it is covered with clusters of blooms but it reblooms with less enthusiasm. The bright crimson red of the flowers, however, make a significant impact in the garden. 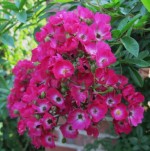 Another small flowered rose adding a lot to the rose garden is the polyantha ‘La Marne’.

A profusion of small pink flowers cover the bush most of the summer.

The annuals in the formal garden are beginning to fill in the open spaces left by the perennials as they faded and were cut back.

The pink portulaca and celosia are a nice contrast in texture while echoing each other in color. 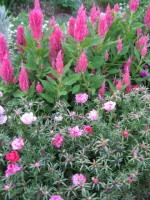 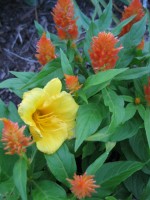 But ‘Stella’ also looks good with the perennial black-eyed Susan.

Elsewhere in the formal garden the sedum is budding up. This is my favorite time of year for the sedum as I especially like the look of the buds. In the past the sedum has bloomed by now so I cut it back 6 weeks ago to force it to bloom later with the late summer and fall perennials.

The white border is the fullest in the formal garden. Here white a low growing white lantana pumps out flowers at the feet of the ‘White Fairy’. 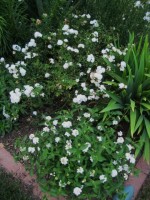 A newcomer to the garden this week is this white lily. It is a single flower on top of a single plant and I don’t know where it came from. It is more delicate than most of the other lilies I have and I love it. I hope more appear.

In the secret garden the lobelia (L. cardinalis) has been blooming for quite a while but I missed its peak! It grows behind a Japanese maple and I came upon it while I was weeding this week. It is just about gone but still adding color with its bright red flowers. 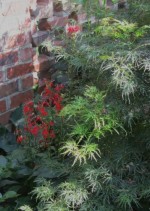 The vegetable garden continues with tomatoes and a few eggplants this week but the heat has really taken a toll on the horseradish.

A close look, however, reveals new growth so I have high hopes that it will recover. We love horseradish and look forward to fall when we can harvest it.

Moving into August gives me hope that there is an end to the heat. I am already looking forward to the change of seasons and the beautiful autumn colors.