Lots of sun and heat this past week but little rain so we have had to turn on the irrigation and do a lot of hand watering. Most plants seem to be happy and continue to do well while others are joining the party.

The rose garden is really booming along with ‘Awakening’ welcoming any visitor by covering the arbor with fragrant blooms. 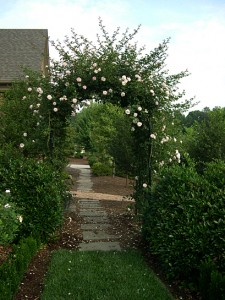 ‘Awakening’ is a sport of the more familiar rose, ‘New Dawn’. It is similar in color but has many more petals. 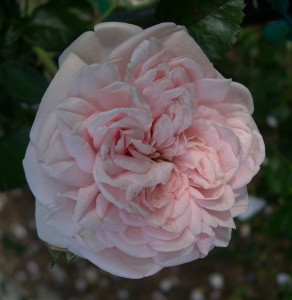 The huge ‘Dortmund’ spewing large graceful sprays of roses over its frame. This is the gentle giant of roses; robust and awkward without a form but producing a lovely sight with a bit of structure in its life and requiring no spraying or special care. The flowers have 5 simple petals but are large and come in giant clusters. 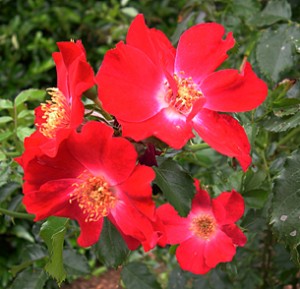 One of my real oddities is the rose ‘Greensleeves’. It opens peach but fades to green.  The worst problem is that its stamen are thick and easily destruct with age into an ugle brown mass that ruins the appearance of the flowers. I have tried to hide that fact by the angle of the picture because the flowers are really quite pretty. 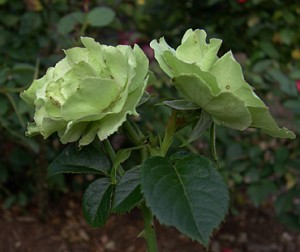 ‘Lillian Austen’, an English rose bred by David Austen, is the single most beautiful rose in my garden; the pictures don’t really capture the subtle blends and changes in color. Its buds are dark red. 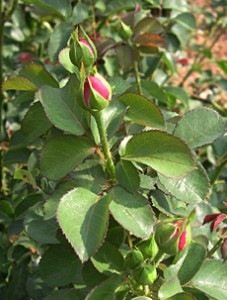 It opens with a multitude of petals in a blend of colors. 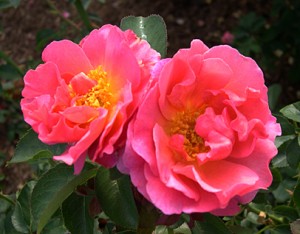 And slowly turns to pink before dropping its petals. New and old flowers are on the same bush creating a unique and lovely look. 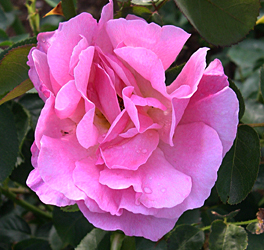 Even this little polyanth with its darling little cup shaped flowers that never fully open, is putting on a show. I love the look of the flowers and also have an apricot version, ‘Margo Koster’, that I pair with the peach colored David Austen rose ‘Ambridge’ (not in bloom at the moment). 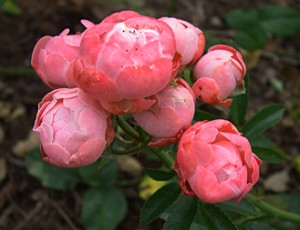 The secret garden benefits from its proximity to the rose garden as the roses growing near the garden wall like to creep into the secret garden. Here is ‘Marjorie Fair’ poking through the wall in the corner on the right to enjoy the intimacy there. 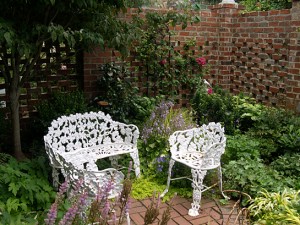 The flowers are produced in large clusters and are crimson with white eyes set off by bright yellow stamens. Eventually I will stop dead heading and small red hips will form. 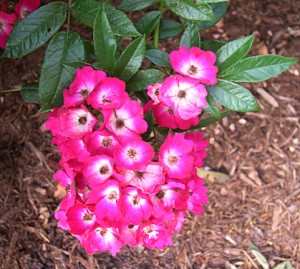 A new addition to the secret garden is this simple fountain the head gardener made from a glazed pot I recently bought on sale at a local garden center. The secret garden is small and I did not want to give up garden space to a basin under the fountain so this fountain does not overflow; the water stays with in its confines at all times. In the formal garden the fennel kept blooming and produced lovely delicate green-yellow flowers that I wanted to enjoy for another week, so the nearby phlox are going to tough it out under the fennel. 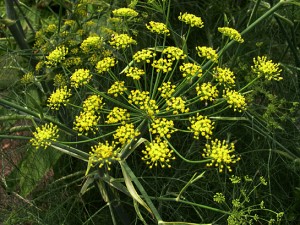 The green yellow of the fennel is echoed by its neighbor, the budding goldenrod (Solidago ‘Peter Pan’). I think I like the goldenrod better when it is in bud than in bloom. 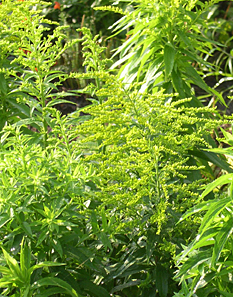 In the opposite side of the formal garden the stargazer lilies have begun to bloom. I planted them 2 years ago but this is the first time they have made a show, probably because we had a real winter this year. In past years I have had trouble with lilies because they came up early in response to mild winter temperatures but were then zapped by spring freezes. 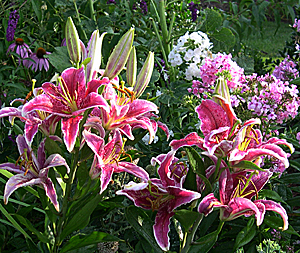 Do you know why they are called stargazers? Because the look up (at the stars) while many lilies look downward. 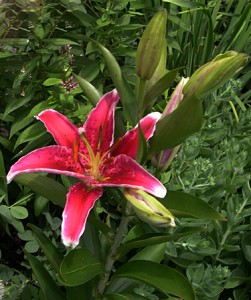 My admiration is great for this clematis ‘Jackmani’ that is growing so well and flowering with such abandon. This poor plant was planted a year ago in the spring and has periodically been mowed by the head gardener and the lawn service that helps us out when we go away. I had really given it up for lost, but I gave it my maternal care, fertilized it (clematis are heavy feeders), watered it, and prayed. Low and behold, it arose like a phoenix and is blooming in glorious abandon. Whew! The daylilies in the allee are slowly fading out, and the crepe myrtle are beginning to shed their flowers as they settle in for the long hot summer of the South. The effect reminds me of a light snowfall. 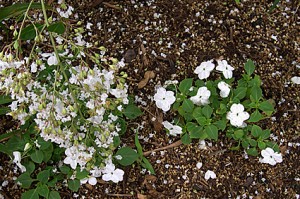 Meanwhile the vegetable garden is really hitting its stride. I pick every morning before the sun gets hot so I will do a good job. When it is hot I tend to dash through the picking, missing many ripe fruit (vegetables), and then find them the next day when they are over grown and ready to be tossed. This was the week of my first bell pepper and my first tomatoes; the big yellow one was the very first, early in the week. I found the red ones today. Note the big motley one; it’s a German Johnson, a heritage tomato that is very popular here. I have never grown it before or even tasted it. One of the farmers market venders has a sign in front of his German Johnsons saying “The uglier they are the better they taste”. I hope he is right. I pick my tomatoes as soon as I see them begin to ripen so I don’t have to share them with some four-legged visitors to my garden who take one bite and throw the tomato away. Grrr… More warm sunny weather ahead so more flowers, more veggies, more weeds. Now if we would just have some rain!