High temperatures and lots of rain have made July a difficult month. The lawn if already filled with brown areas due to fungus, a significant number of roses have lost their leaves, and mildew is covering squash, resistant phlox, and many other susceptible plants. Even the impatients and begonias are falling over due to rotted stems. If fungus doesn’t bring a plant down heat takes it toll and both iris and daylily foliage is looking very ratty and brown. Yet some things survive and thrive and the garden is still a pleasant place to be.With the coming of July the daylilies slowed down. Only a few continues to the end of July and those few will do doubt be done by the first weekend in August. One of the stars of the late blooming daylilies was ‘Lady Neva’ with her long slender petals. 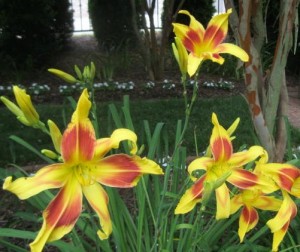 Another late bloomer, ‘Blood Sport’, echoed the orange of the butterfly weed behind it. As the daylilies faded away, some of the true lilies began. The Oriental lily ‘Stargazer’ was the first to bloom. And was followed by the similar looking heirloom lily, Lilium rubrum. 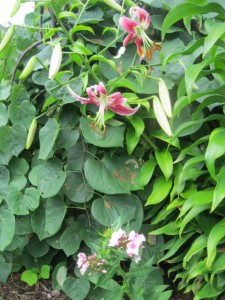 A couple of weeks later, the very tall heirloom lily ‘Black Beauty’ burst into to bloom. The flowers are similar to rubrum lilies but the plants are much taller and more floriferous. One ‘Black Beauty’ had a problem and several stems were fused together and bore a multitude of leaves and flowers. It looks like a giant bouquet but has just one (wide) stem. The beginning of July also saw the bloom of the globe thistle. 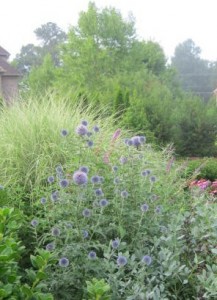 The flowers only lasted 10 days but they are so stunning I cherish them. 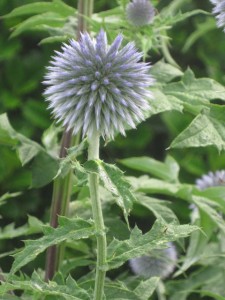 The garden planted around the birdfeeders and bath has come into full bloom. 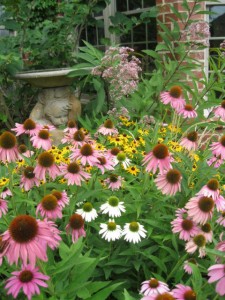 The yellow of the dwarf striped miscanthus grass is complemented by the bright black-eyed susans around it. 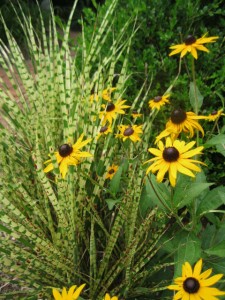 The Joe Pye weed attracts hummingbirds as well as lots of bees. 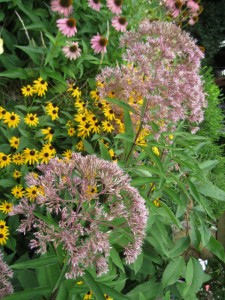 The coneflowers have been a major feature of the formal garden. Both white and pink coneflowers nestle together with fennel and shasta daisies “Becky’. The ornamental dwarf fountain grass , Pennisetum hameln joined one of the coneflower plants at the beginning of July; And went on to become an eyecatcher. Several vines from the genus Ipomoea graced containers. The sweet potato vine (Ipomoea batatas ‘Margarita’ is by far the most vigorous. I took abundant cuttings and am using them to fill in all the empty spots in the garden and containers left by dying plants. The two plants in this container are the biggest so far, and they have been trimmed several times. 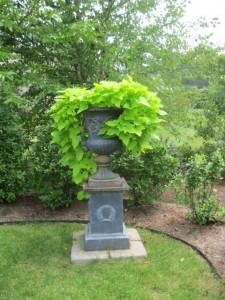 Another Ipomoea is moonvine (I. alba). It is growing very slowly and makes little impact now as it grows up the support in the middle of a large pot. (Yes, that’s sweet potato vine hanging down the sides of the pot.) The flowers are lovely but you have to be out and about the garden by 9 or 10 in the morning to see them. 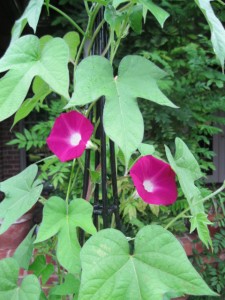 The vegetables continue to roll in. The yellow squash are the most prolific but the acorn squash are adding significantly to our meals. Tomato season is also here and I am eating 5-6 big ones per day. ‘Supersonic’ seems to be our best producer, partly because it seems more resistant to wilt. It produced the first tomatoes and will probably produce the last. 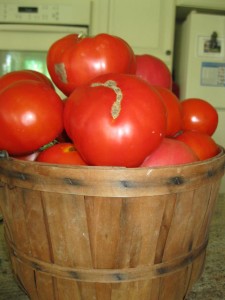 When the tomato crop is good, the weather can’t be all bad and this has been a bonanza year for tomatoes!