Five days of rain and cloudy weather shattered the rose garden and inhibited many perennials, but some pushed on and, unable to contain their enthusiasm, burst into bloom. They are truly the troupers of my garden and I love them. Rain or shine they never disappoint.

This was the case with these balloon flowers (Platycodon grandiflorus var. mariesii) growing only 12” high but bearing very large intense blue flowers. Here flowers were shyly peaking out from under their mound of foliage, as if testing the situtation. 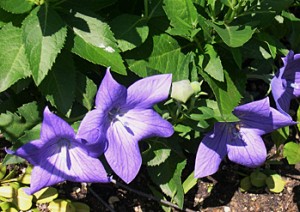 The deodar cedars (Cedrus deodara) have done will with the high rainfall all spring and have responded with extravagant new growth on the tips of their branches.  The color of  the new growth enhances the statue that peaks out from the overhanging boughs. 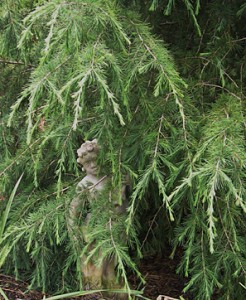 The variegated Japanese iris ( I. ensata syn. kaempferi) rejoices in the rainfall that it needs for blooming, and is undaunted by the constantly overcast skies. 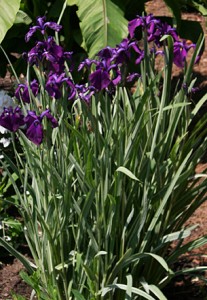 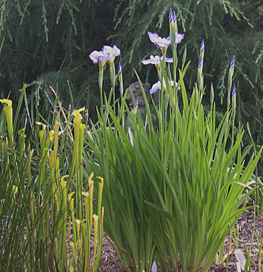 In another part of the bog garden the Louisiana iris (I. fulva ‘Black Gamecock’) blooms with its deep purple tones (not reproduced well in photo) accented by the bright gold beard. 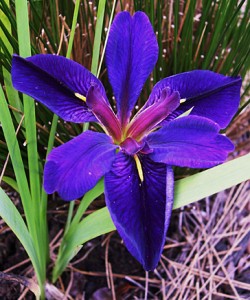 The pitcher plant (Sarracenia flava) has sent up one flower in addition to numerous rolled leaf pitchers. 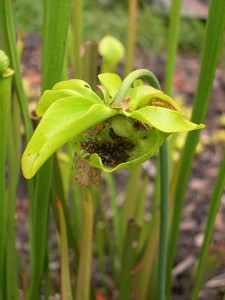 The lilies are beginning to bloom, both daylilies (Hemerocallis) and true lilies (Lilium).  ‘Stella de Oro’ was the first daylily to bloom with its golden yellow flowers rising above its compact foliage. 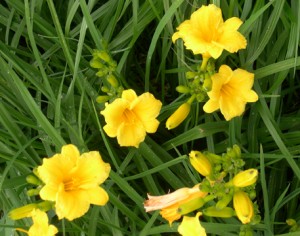 Daylily ‘Happy Returns’ was close behind with a single lemon-yellow blossom so far but with many buds promising a bright future. 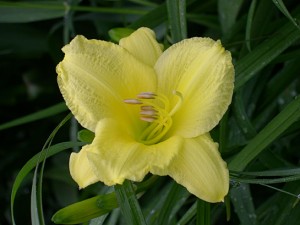 Nearby yarrow (Achillea x ‘Moonshine’)  blooms with its flowers of a similar hue. 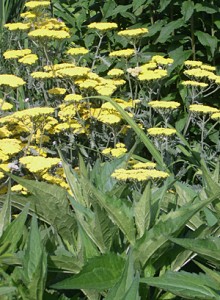 Meanwhile, the true lilies were sending up their bud-laden candelabras. Only my Asiatic lily ‘London’ opened its flowers this week but there are more to come. I like the blue of the Spiderwort (Tradescantia virginiana) with the yellow of the lily. 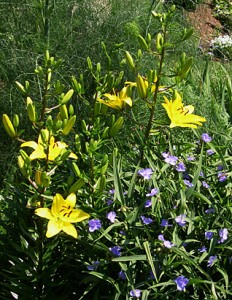 The yarrow (Achillea x ‘Cornation gold’) picks up the golden yellow of the blanket flower (Gaillardia x grandiflora ‘Goblin’) at its feet. 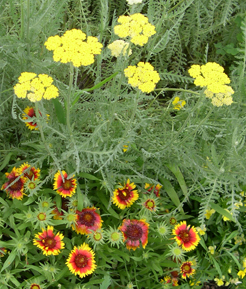 Nearby another yarrow  (A. millefolium ‘Paprika’) echoes the red of the same blanket flowers. 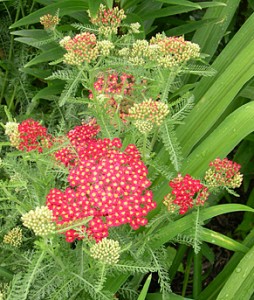 The geranium ‘Johnson Blue’ makes the white foliaged plants around it sparkle. 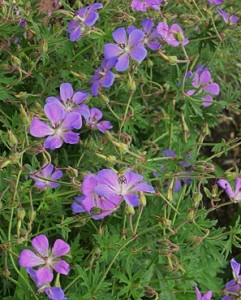 The Lady’s Mantle (Alchemilli mollis) really came into its own and billowed over the walk in the secret garden.  Its chartreuse flowers complement the variegated hostas and hakenachloa that grow with it. 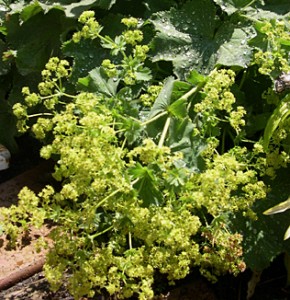 In another area of the secret garden the fringed bleeding heart (Dicentra exima) makes a good show with its unusually shaped pink flowers.  The dense dissected foliage adds a light delicate look to the garden. 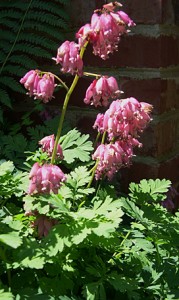 One of the new clematis (Clematis ‘Carnaby’)  pushes out a lone flower and will be trained up the garden wall. 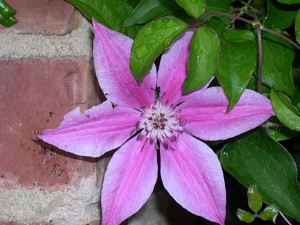 Another clematis, ‘Jackmanii’, that we just planted has really taken a liking to its new home and has already started its journey across the fence along the pool garden. We planted its roots underneath a young cherry tree and spread the vine on the fence nearby, so it gets sun while keeping its roots cool. 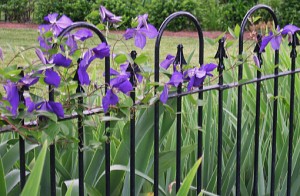 The last of the roses are giving forth some bloom. David Austin’s ‘Ambridge’ is a lovely shade of apricot. ‘Ambridge’ is a small compact rose that has healthy foliage and repeat blooms quickly. 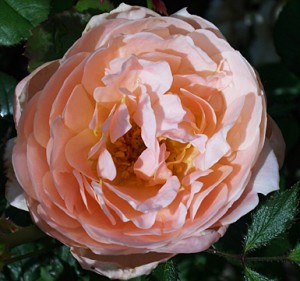 ‘Evelyn Fision’, on the other hand is a brilliant, vivid, scarlet red. It is also known for its ability to stand up against rain and my bush certainly proved it this week. 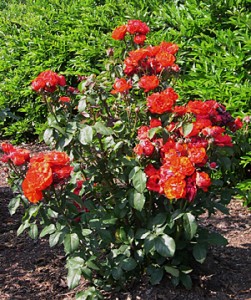 The shrubby privet hedge (Ligustrum japonica) around the rose garden is beginning to bloom. The sprays of flowers are very pretty used as filler in an arrangement of roses. 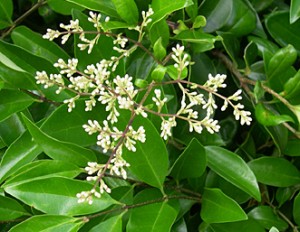 The vegetable garden has an abundance of lettuce that the rabbits overlook in favor of the growing tips of the phlox. The musclun is almost too pretty to eat.  We grow Romain (that never head), and leaf lettuce (Black Seeded Simpson) but tasty as they are, they do not look as appealing as musclun. 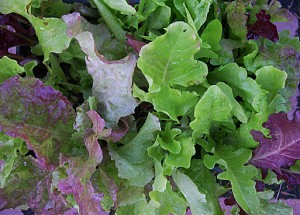 The grass provides a verdant foreground throughout the garden and the lush green foliage of the shrubs and trees stands as a beautiful background; all that rain isn’t so bad after all. What will the next week bring?