What a great week!  We had nice sunny warm days with low humidity.  No rain, however so we had to get the irrigation system going.  The week was a busy one with two major projects.  The first was extending the irrigation system to new areas; the second was putting rocks in the area where we have a dwarf conifer collection.  Both projects went well with the help of the landscaper that did the initial grading and planting of our garden, the irrigation system, and many other projects.  We would not have a garden without this great guy.

The irrigation project involved two different issues; supplying water to some new garden areas, and providing water to the permanent pots in the boxwood parterres.  In the past we have watered the pots by hand but when we went away for more than a couple of days had to set up a temporary irrigation system that was unsightly and labor intensive. The new system involved carefully digging trenches through the boxwood parterres trying not to disturb the surface roots of the boxwoods. 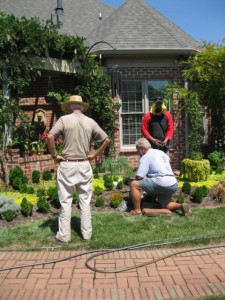 A network of tubes was then put in the trenches so that each pot can have drip irrigation.  The volume of water, duration of watering, and weekly schedule of watering can be changed to suit the plants and the weather conditions. 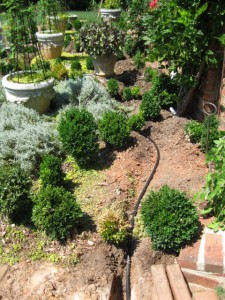 The dwarf conifer collection lies in some beds that also hold some other unusual trees and shrubs but we thought that they would look more natural in the company of rocks. 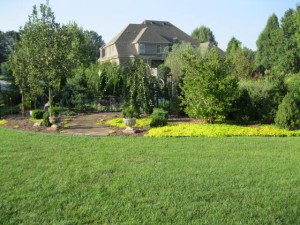 We went to the local garden centers that sold rocks and found some great looking small boulders from the Tennesee mountains near Chattanooga.  Size and weight were a huge issue since the bed with the dwarf conifers was in the backyard and can not be reached by a truck because of iron gates and fences.  Our rocks arrived on our landscaper’s trailer early in the morning. 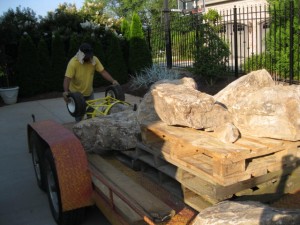 Using a hand truck the headgardener and our landscaper moved the rocks into the general area where they would be placed. 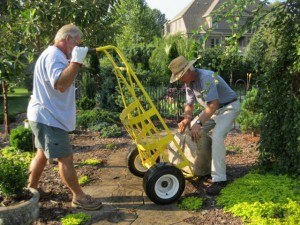 After a couple of days of digging the head gardener partially buried the rocks in their permanent homes and rockery was complete. 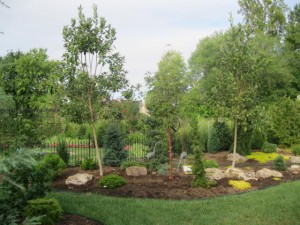 The prettiest roses this week are a red and a white.  The red one is a cutting from a bush we had in Annapolis and we can not find anyone who can identify it (we think it’s ‘Oklahoma’).  The bush is a bit ungainly but is tough and has survived many hardships. 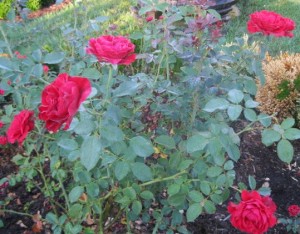 The flowers are full and fragrant so we often cut them and set them inside where they can perfume the room. 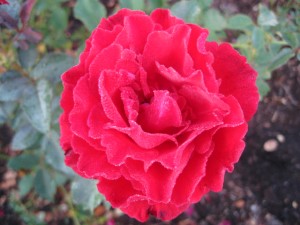 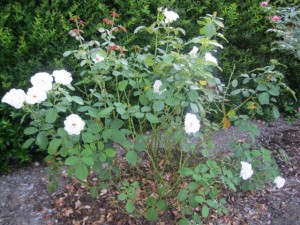 It’s flowers are a very pure white and borne in clusters. 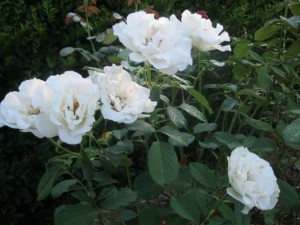 Less floriferous, the yellow patio rose in the formal garden picks up the yellow of the goldenrod as it begins to form buds. 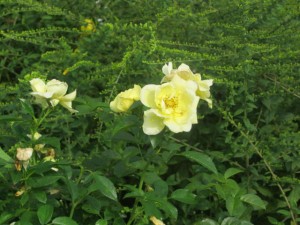 The Mexican sunflowers that were just beginning last week have produced many more flowers and are virtually butterfly magnets in the afternoon (but not in the morning for some unknown reason).  I watch the butterflies fluttering from one flower to another from my kitchen window over 100 feet away. 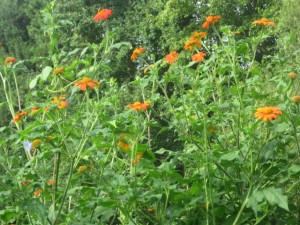 The purple muhly grass is beginning to bloom. 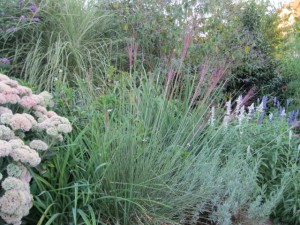 Much of my lamb’s ear has melted out or died. 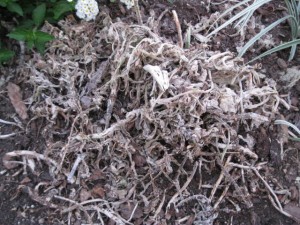 But this big leaf cultivar, ‘Countess Helene Von Stein’ is still hanging in there. 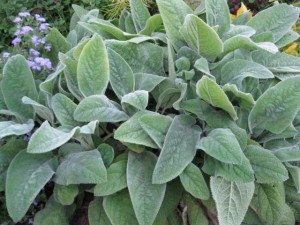 Hidden beneath the leaves of the banana tree small cluster of white cosmos bloomed. 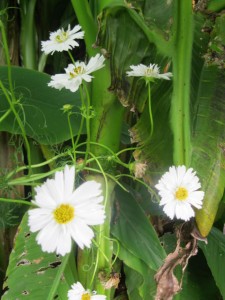 This lone plant of white balloon flower is finally blooming  and looking good with blue salvia ‘Victoria’.  I cut it back a couple of times because balloonflower tends to get too tall and floppy in my garden.  The result was good and the plant is just the perfect size for the mid-border. 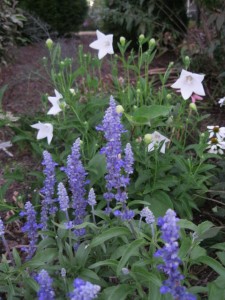 Another successful cutback job was that done on the butterfly bush.  About a month ago I cut off about a foot on all the stems and now the bush is blooming away. 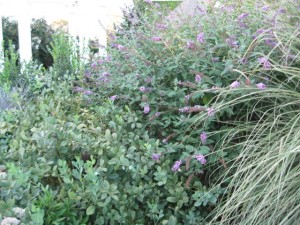 The wood’s asters continue to open their flowers.  I love the way a few flowers open at a time so that the plant changes every day for weeks. 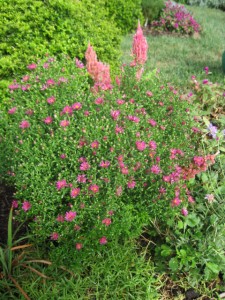 Lots of color is coming from the celosia and crimson barberry. 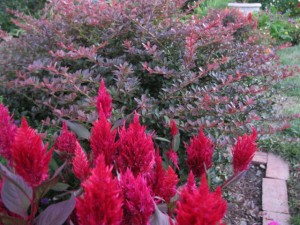 I usually keep the basil from blooming by trimming of the tips but this one got away from me. The pink of the flowers is exceptionally pretty with the purple foliage. 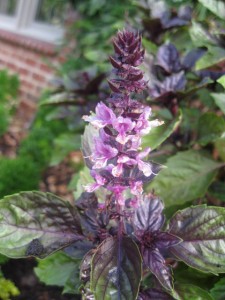 Evidence of fall is beginning to creep into the garden and I welcome it.