A Visit to a Tea Village, Longjing, China

For years I have heard about the health benefits of green tea and on occasion have bought a box at the supermarket and tried to make a habit of drinking it. But it was not until I went to the village of Longjing near Hangzhou, China, that I really became interested in green tea. The name, Longjing, means “Dragon Well” in Chinese and refers to a spring with water that is very pure and heavier than rain water. Due to the difference in density between the spring water and the rain water, the rain water sometimes moves about on the surface of the spring water in a sinuous way resembling the movements of a Chinese dragon. Dragon Tea is produced in the village of Longjing and is said to be a very high quality green tea. Although I can not vouch for the quality of the tea, I can vouch for the very high price it fetches.

As we approached the village we noticed that the surrounding mountains were covered with tea terraces. The area has a mild climate and plentiful year-round rainfall, ideal for growing tea. 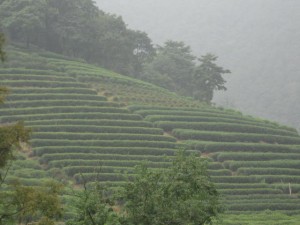 There are three common kinds of tea produced in China, green tea, black tea, and oolong tea and they all come from the same plant, Camellia sinensis.

The differences between theses three kinds of tea are due to the way they are processed. Oolong tea and black tea are processed by heating the leaves for a relatively long time and as a result have a darker color, stronger flavor, and fewer antioxidants than green tea. Green tea, with its pale light green or yellow color, is lightly heated so that the natural oxidation process in the tea is stopped but the antioxidants in the tea are preserved. These antioxidants are what make green tea so highly regarded for health benefits, real or imagined. 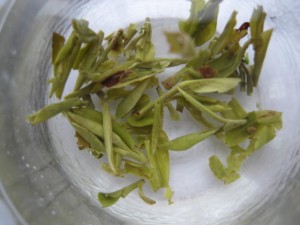 The quality of Dragon Well tea depends in part on the time the leaves are picked. The best quality tea is produced from the leaves picked in spring, before the Quingming Festival (about April 4th). The tea leaves picked a bit later in the spring but before the Grain Rain (about April 20th) are fairly good but are of second quality. The picture below was taken in late September (I wonder about the quality of the leaves that were picked then.) 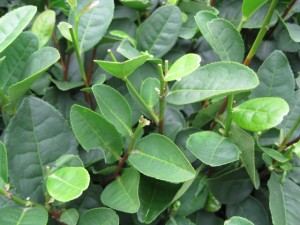 After the tea leaves have been picked but before they are processed they are graded with the poorest quality going into teabags (shown on the right in the picture below). Each grade of tea has a special method of processing that is carried out by professional tea masters. The highest quality of green tea offered to us for sale cost a bit over $400 per kilo (shown on the left in the picture below.) 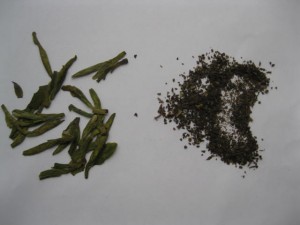 The good news is that several cups can be made successively with one teaspoon of dried tea leaves. The bad news for me is that I just don’t care much for the taste of green tea.  Apparently I am not the only one that feels this way and the Chinese salesgirl recommended adding  dried orange rind that she also had for sale.  I tried orange rind when I returned home but found that a bag of black tea dunked into the cup of green tea does the trick too.