A Visit to Master of the Nets Garden (Wang Shi Yuan) Suzhou, China

A visit to Suzhou is a “must do” for any visitor to China who likes gardens. Gardens have been part of Suzhou’s landscape since the Song dynasty, 1000 years ago. During the peak of classical garden development, in the Ming and Qing dynasties, there were 200 gardens, or so we are told. Presently, there are about a half dozen large gardens as well as a number of small ones, that have been restored and can be viewed. Wang Shi Yuan (Master of the nets Garden) is one of the best examples of a scholar’s garden and is a UNESCO Word Heritage site. Lying on 1.34 acres of land in the southern part of the city, the Master of the Nets garden was known as Ten Thousand Scroll Hall when it was built in 1140, during the Southern Song dynasty by Shi Zhengzhi, a government official. The garden was also know as “Fishing Retreat”, a name which may have influenced a later name change. The garden gradually declined until Song Zongyuan, a retired government official during the Qing dynasty, redid the whole place starting about 1785 and changed the name to Master of the Nets Garden. It has been suggested that perhaps Song Zongyuan’s choice of name was based on his desire to show that he was no long interested in politics and the pursuit of wealth. Instead, his interests turned to more intellectual and contemplative endeavors and he built the garden to reflect those interests.

The new name that evokes images of a fisherman and the tools of his trade belies the impressive surroundings that included 22 buildings with 2 richly carved doors, 15 brick carvings, and 32 stelae, and the garden that consists of a large pond, bridges, courtyards, rockeries, and centuries old trees. 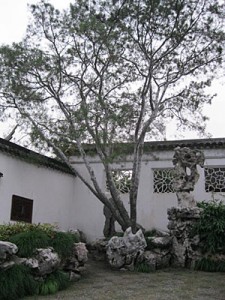 A look at a painting of the garden show two dominate characteristics; the very large amount of area that is devoted to water, and the relative small amount of area that is devoted to plant material. Notice also that each building has access to a patio or garden area and that the small buildings are close to the water while the larger ones are set back and partially hidden from view by plantings so that the area looks bigger than it is and does not appear crowded. The main entry gate in the southeast corner of the area presents an impressive display of carving. The four symbols on the lintel mean literary grace and flying high. 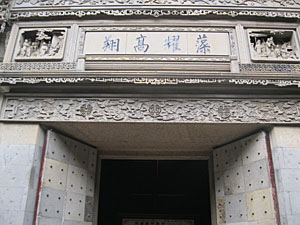 The rectangular carvings on either side are three dimensional and filled with figures depicting scenes from opera and theater. 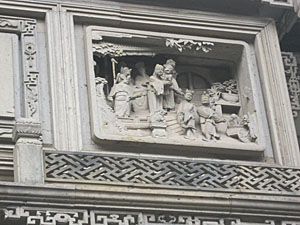 After passing through the main gate and through some courtyards and residential buildings you come to the center of the garden where the pond, called Place for Gathering Breezes is located. A sluice in one area suggests the movement of the water through the pond. 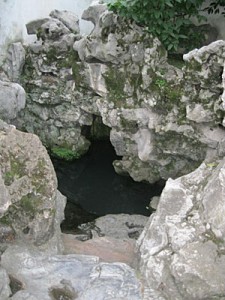 The pond is surrounded by several pavilions and a rockery. The reflections in the water of the pond add another dimension to the scene. 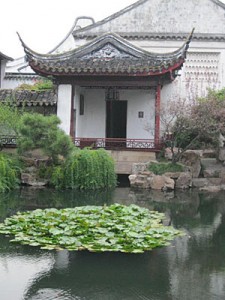 A zigzag bridges takes visitors from one area to another. 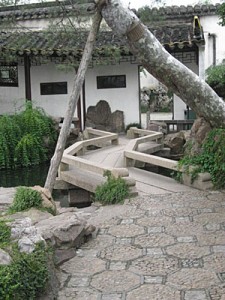 The hexagonal pavilion, Moon Comes with Breeze, gets its name from a verse by Han Yu, “The twilight brings the autumn and the breeze sends the moon here.” 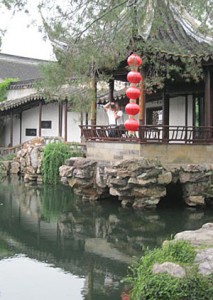 The Duck Shooting Corridor is enhanced by the moon gate that invites the visitor within. 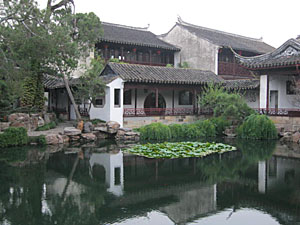 Leaky windows adorn walls and give glimpses of the smaller garden areas as you walk through the garden.

The view through each window is unique and gives a glimpse of another area of the garden. The pavement throughout the garden was richly decorated and carefully executed. Some artisans were working on pavement repairs when we visited. 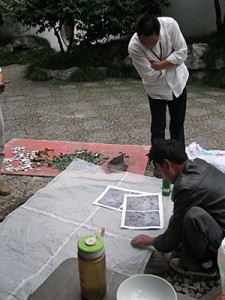 Rocks from nearby Lake Tai are used extensively all through the garden. A great mass of rock screens off the view of one building from the pond area to create more space. The mass of rock is called Cloud Ridge, a difficult name for me to understand in this situation. A passageway through a mass of rock leads to a room in the library. Some of the rocks have been placed so that they play the role that statues do in western gardens. In other places the rocks are complemented by trees and mondo grass used as a ground cover. Low fences of bamboo can be found in some areas along the garden beds.

This potted plant tree a bit pathetic surrounded by the gaudy petunias; I love petunias, but they seemed out of place in this every so tranquil garden with its soft colors. Hopefully you will have a cool day, with a blue sky slightly touched by a few clouds, as we did not. The climate can be very hot and humid in the summer so a fall or spring visit is preferred. This garden is very popular with tourists, especially Chinese tourists, so go early in the day and plan to see a smaller, less popular garden afterward. If you really want to see the gardens of Suzhou, plan to spend several days; a day trip from Shanghai is possible but you will only be able to see one or two gardens. What a pity!