I had no idea what to expect as we were driven to Prince Gong’s palace and garden north of the Forbidden City in Beijing but once we arrived we were amazed with the spectacular show of rock, water, vegetation and buildings. The complex was originally built in 1777 for a minister in the Qing Dynasty named He Shen who became a favorite of the emperor and is said to have occupied as many as 20 offices at one time. Apparently, He Shen did not handle the situation well and ended up forfeiting his life and palace complex in 1799 because he was suspected of corruption. The emperor confiscated the compound after executing He Shen’s and gave it to his brother, Prince Gong, in 1851. Since then it has had several owners and in 1982 was declared one of the Chinese National Cultural Heritages. It is considered the best preserved of the princely mansions from the Qing Dynasty (1644-1911) and has been open to the public since 1996. The whole compound is worth seeing but the garden alone is well worth the price of admission.

The garden lies on about 7 acres in the northern part of the compound and is known as Cuijin, Cream of the Most Beautiful Flowers. It is surrounded by a wall with an imposing main gate and consists of many features including a large pond, bat-shaped pool, numerous pavilions, an opera house, a huge rockery, and stalagmites. 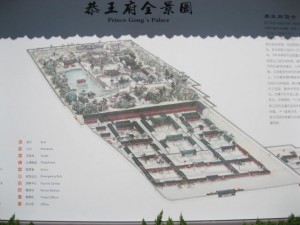 The Western-Style Gate is made of white marble and stands on the central axis on the southern end of the garden. Inscriptions on the outside and inside refer to tranquility and the lasting beauty of spring. 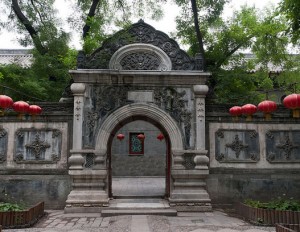 Inside the gate a large rock 15 feet high called the Dule Peak (Self-Enjoying Peak) bears inscriptions which suggest that the emperor enjoyed the pleasure of his garden while ignoring the political chaos around him.

The Fragrance Pavilion on the west side of the entrance is a two-storied wood structure with an unusual shape. It stands among lilacs and visitors can enjoy the fragrance in spring.

One of the most beautiful and prominent features of the garden is the large pond and the paviliion than stand in its center. The pavilion was build to look like an ancient highly decorated boat, with three open rooms in the center. 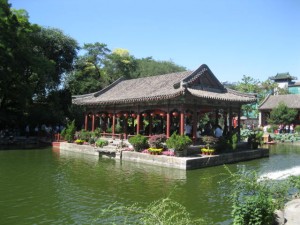 The pavilion is connected to the edge of the pond by a picturesque causeway. 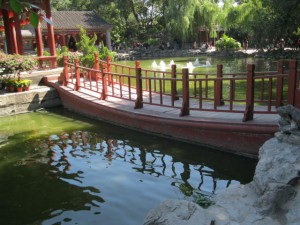 Fountains bubble up water nearby. 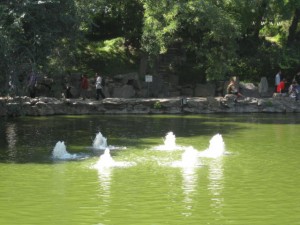 The Flower Veranda House overlooks the lotus filled north end of the pond. 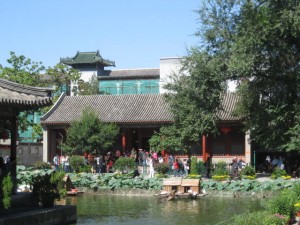 The Poetry and Painting Boat, actually a long corridor, runs along the eastern side of the pond. It is said that walking along the corridor can feel like walking in a boat, hence the name. 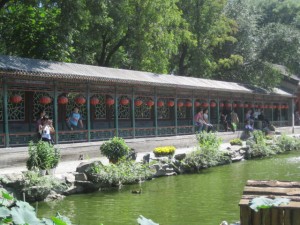 A small rustic bridge, Crane Bridge, connects the pond to “Bat Pool” and commemorates the days when cranes used to roam about the garden. Bat is a homonym of happiness in Chinese and it is said that the garden is decorated with 9,999 bats. 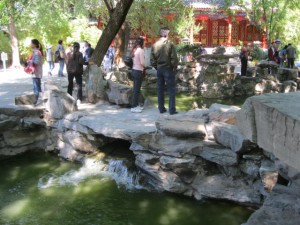 The view from the bridge shows the inviting charm of the pond’s edge. 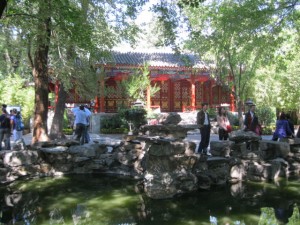 Stalgmites stand on the west side of the pond. 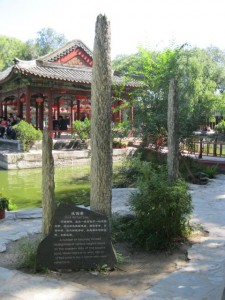 The center of the garden is occupied by a large rockery with the Hall of Green Seclusion at the top. The Stele of Happiness nearby is inscribed with the Chinese character “Fu” in the Emperor Kangxi’s calligraphy. It has five meanings: more sons, more talent, more money, a longer life, and more good luck. The rockery itself consists of large and small rocks arranged to create an landscape that can be entered and enjoyed. 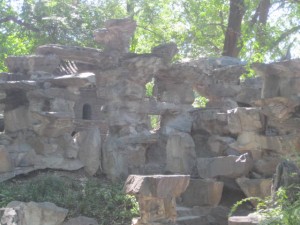 Caves and maze like pathways lead through the rockery. 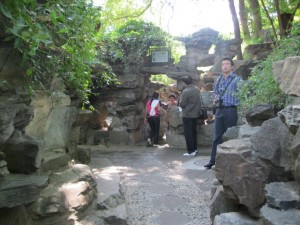 Vegetation is abundant in the garden and tumbles over some of the rocks. 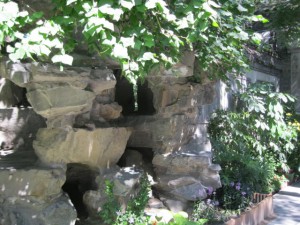 Vines make their way over some of the rocks. 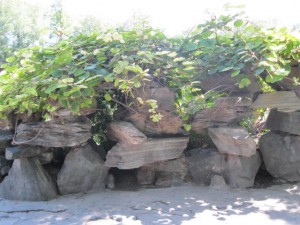 Paths invited visitors to explore but unfortunately we were rushed onward. 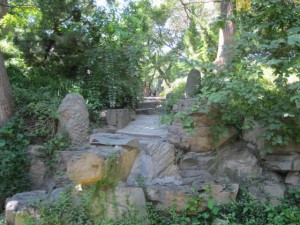 Our time here was brief as we were rushed through by a guide who had no interest in or love for gardens. To bad because this is a beautiful and unique garden and well worth a longer visit.