A Visit to the Summer Palace, Beijing, China

If you expect to visit a lovely lake side garden be prepared for disappointment; the lake and scenery are beautiful IF you can see them but the place is jammed with domestic tourists and the guides want to spend as little time there as possible. Our Beijing guide marched us half way around the lake, let me buy a map of the garden, got us on a boat for a quick trip across the lake and then it was back on the road to the next government factory store. That being said, the Summer Palace is like nothing else we have ever seen before and is well worth any time you spend there. If you have the luxury of planning your own schedule make sure that you set aside a substantial bloc of time for a visit here; the area is large and just the walk around the lake took over an hour.

The Summer Palace that you see now was built on a site of the Garden of Clear Ripples built by Emperor Qianlong in 1750 to celebrate his mother’s 60th birthday. The emperor chose the site because of its picturesque natural hill and the lake that had been created by the damming of waters that flowed into some parks in Beijing. The Emperor was an avid creator of gardens and found it difficult to resist building in a beautiful site. He used many different architectural features from various Chinese palaces to embellish his projects and included a bridged and willowed causeway such as he had seen in Hangzhou, and a street inspired by one in the garden city of Souzhou. The Emperor’s garden was destroyed in 1860 by Anglo-French Allied forces plundering Beijing, but was rebuilt by Empress Dowager Cixi as a summer retreat in 1886 with funds intended for the navy. The garden was again seriously damaged by the Allied Forces of Eight Powers in 1900 but rebuilt and renovated beginning in 1902. 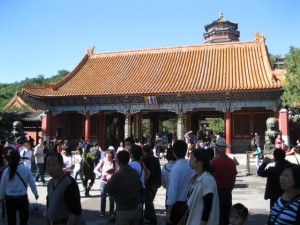 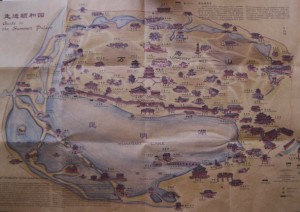 Beautiful Kuynming Lake with Longevity Hill is reminiscent of West Lake in Hangzhou. 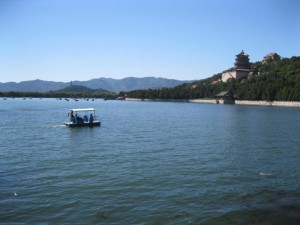 The walk around the lake begins at the Natural Affinity of Water and Trees where the Empress Dowager Cixi docked her boat when she came to the Summer Palace for a visit by water. The lake in this area is crowded with lotuses. 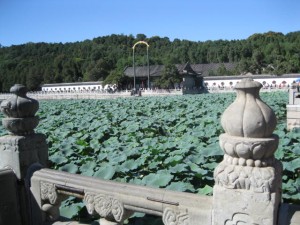 The walls of the hall nearby is pierced by many leaky windows. 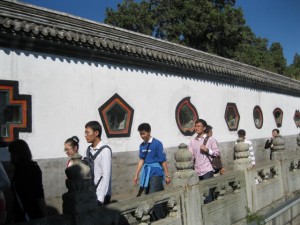 Many different styles were employed to create variety. 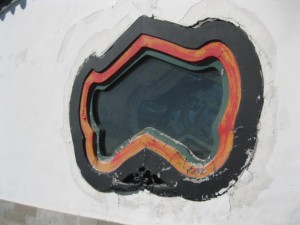 The Long Corridor continues along the lake’s edge for almost 800 yards and consists of 273 rooms with 4 octagonal pavilions representing the four seasons and punctuating changes in elevation. 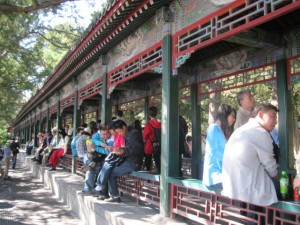 The Long Corridor is decorated with bright colored designs and numerous paintings. 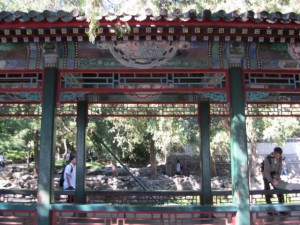 In 1755 when the Long Corridor was first built Emperor Qianlong had artists visit Hangzhou’s West Lake, sketch the scenery there, and then paint 546 paintings of various historical figures using the scenery from their visit in the background. 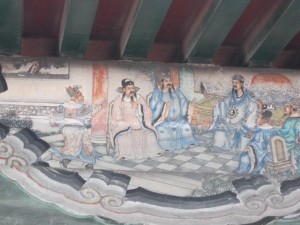 Above the Long Corridor on Longevity Hill are many beautiful and interesting buildings. The grandest of all is the Tower of Fragrance of the Buddha an octagonal, three storied structure that sits over 120 feet high. Next to it on the left below is the Baoyun Bronze Pavilion unique for the use of bronze in its construction. On the left above is the Realm of Multitudinous Fragrance, with its three arched doorways. 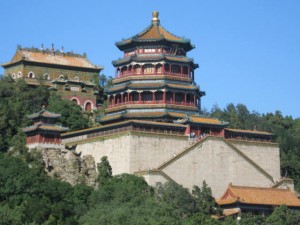 To the left of the Tower of Fragrance of the Buddha is the Revolving Archives, a group of buildings consisting of a main building, side-pavilions, and a large stone tablet bearing the inscription “Longevity Hill, Kunming Lake.” The buildings were used by the emperors an empresses to store copies of Confucian classics, Buddhist scriptures, and Buddha portraits. 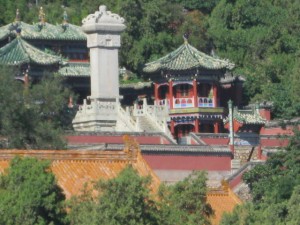 Between the lake and the Long Corridor is the Gate if Dispelling Clouds. 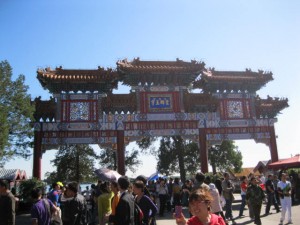 Toward the west end of the Long Corridor and north of it lies the Hall of Listening to Orioles, built by Emperor Qainlong for his mother to listen to opera.  The pavilion was named from the fact that people compared beautiful voices to the singing of orioles. 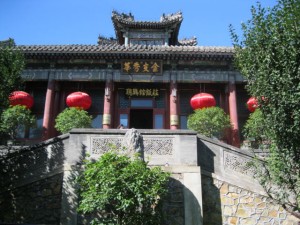 The Marble Boat also called Han Chuan (Land Boat) or Bu Ji Zhou (Unmoored Boat) referring to the fact that is immobile, marks the end of the Long Corridor. Such boats were often built as decorations for classical gardens and Emperor Qianlong’s boat, built in 1755, was in the style of the boat he used on his inspection tour of Southern China. It was burned in 1860 but rebuilt in 1893 by the Empress Dowager Cixi. It is made of wood painted to simulate marble like its predecessor, but is in the style of a paddle boat. Mirrors are placed on each level so that the Empress Dowager could enjoy multiple scenes of the lake. 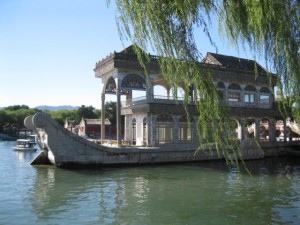 The Marble Boat is also a convenient place to pick up a navigable boat and cross the lake to the other side. 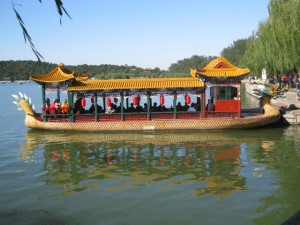 A close up view of the dragon head that adorns the boat is worth the price of the boat ride. 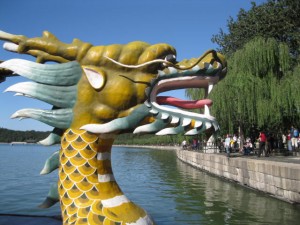 As you cross you can get a great view of the many buildings on Longevity Hill. 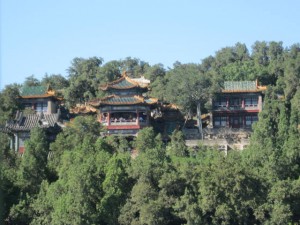 The trip also affords a good view of some bridges, the most picturesque of which is the white marble and granite Jade Belt Bridge. The thin, high arched body is said to resemble a jade belt while the balustrades are carved with designs of fairy cranes flying into the clouds. The emperor and empress passed through here on their imperial boat when traveling to the springs. 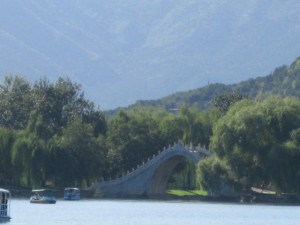 The Seventeen-Arch Bridge connects the eastern shore of Kunming Lake with the largest island in the Summer Palace, Nanhu Island. It is almost 500 feet long, about 4 feet wide, and is decorated with 544 carved white marble lions and imaginary beasts at each end. The largest arch is in the middle with 8 smaller arches of varying sizes on each side, hence there are nine different sized arches on the bridge. Nine is considered a lucky number symbolizing good fortune and safety. 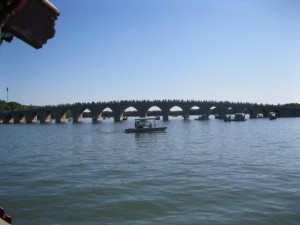 Arrival at a small beautiful pavilion ends the boat trip across the lake. 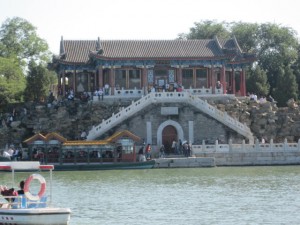 Nearby, the famous bronze ox lies surrounded by the many tourists who want their picture taken with him. Oxen are believed to possess flood control powers and have lined Chinese waterways since the Tang Dynasty (618-907). Emperor Qianlong had this bronze ox cast in 1755 and dedicated personally dedicated it. 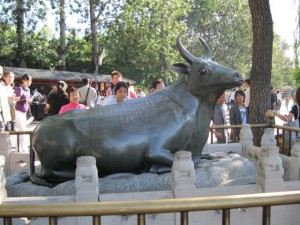 If you look at the map at the beginning of this post you will see that we only saw a small portion of the Summer Palace. There is a huge area on the other sides of Longevity Hill and a series of lakes behind it that we never saw in spite of our pleas. Hopefully, as more tourists visit and learn what is actually there, more guides will take them to some of these less well known parts.