A Visit to Yuhuayuan, the Imperial Garden in the Forbidden City, Beijing, China

No trip to Beijing is complete without a visit to the Forbidden City but don’t count on seeing the Imperial Garden. The shear size of the Forbidden City is overwhelming and perhaps that is why the guides think that the garden is a superfluous afterthought for the visitor but to those who love gardens it is treat. Just because the guides consider the garden worthy of only a glance, don’t assume that the Chinese tourists feel the same way; they don’t, and the garden is jammed packed with them (doesn’t that tell you something?). We had a strong desire to see the garden and we talked our guide into letting us stay for a brief visit but it wasn’t long enough.

The garden was build during the Ming dynasty beginning in 1420 as a private retreat for the imperial family in the northern part of the Forbidden City. It occupies about 3 acres, is rectangular in shape and is surrounded by a wall with two gates, both with enchanting names, The Gate of Compliance and Faith, and Gate of Heaven’s First Creation. The Hall of Imperial Peace stands in the middle of the garden surrounded by four pavilions, one in each corner of the garden, plus other pavilions, towers, and rockeries. 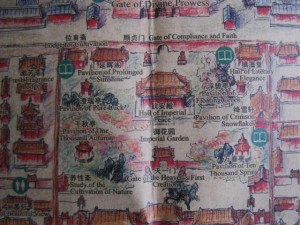 The Hall of Imperial Peace (Qin An Dian) was built in 1535 by the Ming Dynasty. It is a Taoist temple and is home to a statue of Xuan Wu King, believed to be the God of Water protector of the City against fire. Every New Year an altar was set up where the emperor would burn incense pay homage to the god. Another Ming Dynasty building, the Pavilion of Floating Greenery (Fu Bi Ting), was built in 1583 and sits on a single arched bridge over a rectangular pond. It boasts a pyramid shaped-roof covered with green glazed tiles, edged with yellow glazed tiles, and is linked to a veranda by a rolled roof. 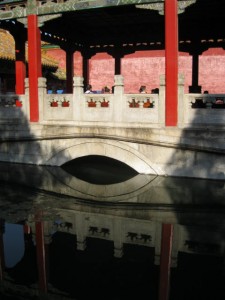 The Pavilion of Ten Thousand Spring Seasons (Wan Chun Ting) stands in the eastern half of the Imperial Garden reminding us that east symbolizes spring. Built in the Ming Dynasty, the building consists of a round upper section and a square lower section that has verandas on all four sides. Inside the visitor can see the highly decorated interior of the dome. 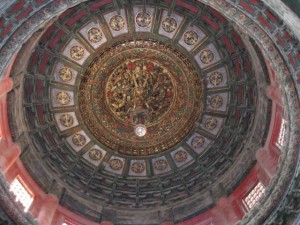 A statue of Lord Guan stood inside during the Qing Dynasty. Rocks were piled up to form the Hill of Accumulated Elegance (Dui Xiu Shan) about 30 feet high. The Pavilion of Imperial Scenery (Yu Jing Ting) sat at the top of the hill and was reached by a path that was used by the emperor, empress, and imperial concubines to climb to the top every year at The Double Ninth Festival to enjoy the scenery. The hill has two caves, one at the bottom of the hill and the other half way to the top. Rocks play an important role in the garden and dominate the scene. 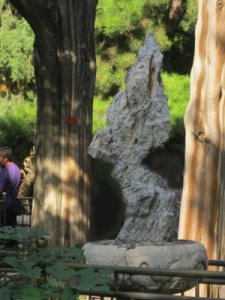 This rock was combines with lush greenery and placed up against the red wall for a striking effect. A rambunctious vine has almost covered this large rock. Sculptures of various materials are present throughout the garden, like this wonderful elephant. And this bronze incense burner. 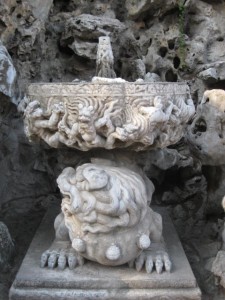 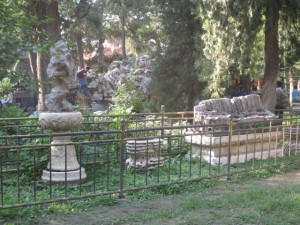 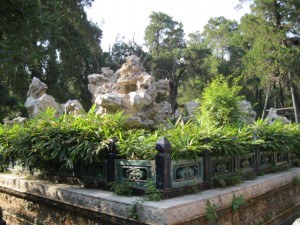 Water channels provide not only water for the peonies but also add a strong linear element to the garden’s design. 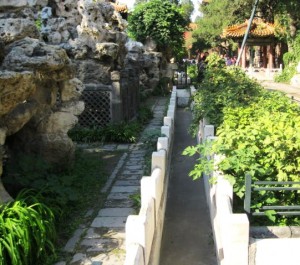 The garden also features a large number of trees, some very old, like this Chinese juniper (Sabina chinensis) that seems to need help to stay standing. Many old lacebark pines (Pinus bungeana) also grow in the garden, another tree that needs some buttressing. 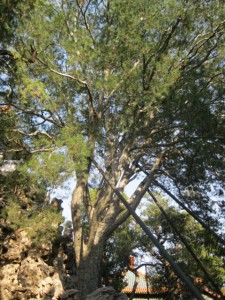 The exfoliating bark of the pines makes them especially interesting. 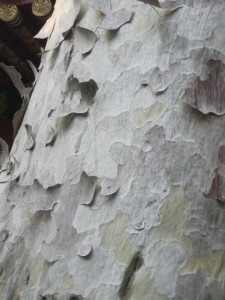 The large (10″ across) catalpa leaves are heart shaped and provide a pleasing contrast with the needles of the evergreen trees. 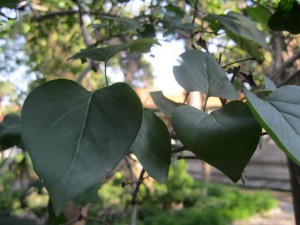 And, of course, there is bamboo, as beautiful as it is symbolic. A paved path leads throughout the garden. It is said that there are 900 different paving patterns! 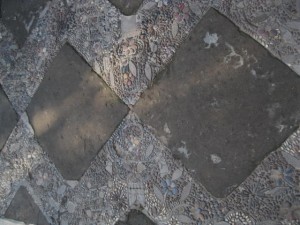 The garden is not large but it has so many interesting features that you need a couple of hours to touch the surface. The shear number of people visiting the garden also slows down the pace and makes it difficult to get pictures that do the garden justice. If you go to the Forbidden City try to avoid weekends and Chinese holidays.