The romance between Henry XVIII and Anne Boleyn is always interesting and a visit to Hever Castle heightens the story and makes it more real. The castle is actually a 15th century manor horse built by Anne Boleyn’s great grandfather around a thirteenth century moated gatehouse. Anne grew up and was courted by Henry at Hever but after her demise and the death of her father the property reverted to the crown and Henry eventually gave it to his 4th wife, Anne of Cleves. Several families owned Hever in the ensuing centuries until the American millionaire, William Waldorf Aster, bought it in 1903 and dramatically changed it, adding among other things, the Tudor village, extensive gardens, and a 36 acre lake. The property is currently owned and operated by Broadland Properties Limited and is open to the public.

The gardens immediately around the castle reflect designs that would have been used at the time the Boleyns lived there but the same is not true of the plants. As you go over the moat the topiary of various shapes greets you including doves, peacocks, corkscrews, tables, and chairs. 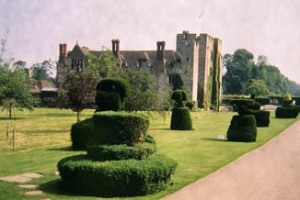 In another area near the castle is the Tudor Village, built by Astor for his servants and guests. 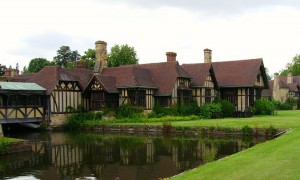 Beyond the drawbridge is the yew maze, quite a bit of fun for both children and adults. 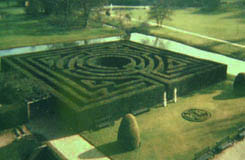 Nearby is a chest set topiary in golden yew. Quite fantastic! The design is based on 16th century chess pieces that are now in the British Museum. 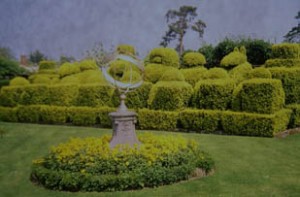 Further on there is a water maze set on 16 acres and consisting of a series of concentric stepping stone walkways. Hidden jets spray water on unwary visitors trying to reach the stone grotto in the center without getting wet.

Across the moat is a large lawn with the lovely half moon pond backed by a clipped yew hedge. A Roman statue of the goddess Venus with Cupid at her feet stands on one edge of the pond. 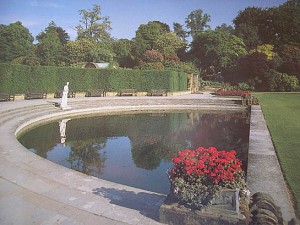 Aster was a collector of classical statuary, busts, urns, well heads, and sarcophagi and he built the Italian garden to provide a setting for many of his pieces. The Italian garden consists of a large central area with clipped yews and containing urns, fountains and columns. 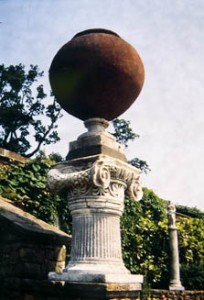 Hidden in the center of the Italian garden by clipped yews is the Sunken Garden with a pool, statuary, flower beds and curved benches that fit into the stone wall of the raised flower beds. 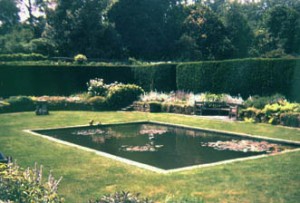 Along one side of the Italian garden is the Pompeian Wall running 1/8 of a mile long and containing a large number of Roman and Renaissance artifacts in a series of bays. 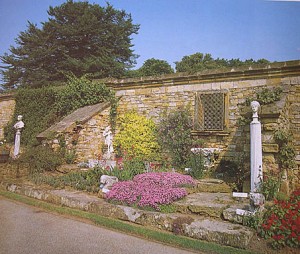 Along the opposite side of the Italian garden is the Pergola Walk, inspired by the hundred Fountains at the Villa d’Este at Tivoli near Rome. Climbers cover the pergola and provide pleasant shade while you walk along enjoying the pleasant sound of the water in the nearby grottos. 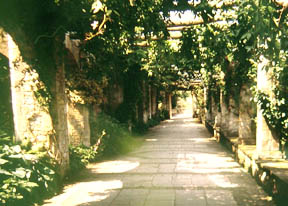 At the far end of the Italian garden is the loggia with a pillared colonnade and steps to a piazza below. Here you have a beautiful view of the lake. 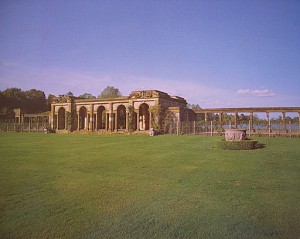 The beautiful nymph fountain of white Pentelic marble is adorns the piazza. 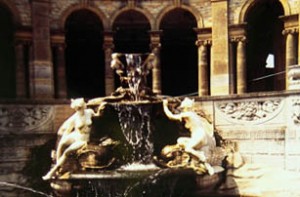 A walled rose garden with a fountain in its center is said to contain 3,000 roses including modern roses and climbers. The small Blue Garden lies behind the rose garden. It contains a variety of blue plants arranged around large rocks. There are many more areas with open lawns, shade trees and other plantings that encourage you to stop and enjoy the scenic beauty of the place; many perfect places for a picnic.