A Visit to the Boboli Gardens (Giardini Bobolo) Florence, Italy

If you visit the Boboli gardens with the idea of seeing vast beds of flowers you are going to be disappointed; there are very few. If, on the other hand, you go to see grand vistas, shady avenues of trees, grassy slopes, deep fountains, and monumental sculpture, you have come to the right place. The garden was never meant to be a retreat for individuals, but rather a spacious setting for the pageantry of the grand functions that were popular among the wealthy in Renaissance Florence. The green vegetation provided not only a perfect backdrop for the colorful clothes worn by the visitors of those far off days but also a welcome relief from the hot Italian sun.

The garden is located behind in the Pitti Palace that was built by Lucca Pitti, a Florentine banker, to rival the villa of Cosimo the Elder and ordered that each window to be as large as the doors of the Medici palace. The Pitti family fell on hard times, went bankrupt and had to sell their property to their arch rivals, the Medici’s, in 1540. The garden was laid out for the Grand Duke Cosmos I’s wife, Eleanora of Toledo, Spain, by Nicolo Tribolo continued by Bartolomeo Ammanati with contributions by Giorgio Vasari and Bernardo Buontalenti and others. It is the first example of a palace and courtyard opening directly onto the garden, fusing architecture and nature. It has changed several times over the last 500 years and at one time or another has included many features that have been lost including a labyrinth, aviary, bowling green, topiary and botanical garden. Plants from all over the known world were brought here and it was the first garden in Italy to grow potatoes and cultivate mulberries to raise silkworms. This 18th century engraving gives you an idea of the layout of the garden during the 1700s. I added labels I on the most important landmarks you can see today. The primary axis of the garden runs from the amphitheater up the hill terminating at a statue of Neptune; a secondary axis, runs along terraces and wooded areas. The formal gardens on the right hand side no longer exist and now are woodland areas with winding paths. 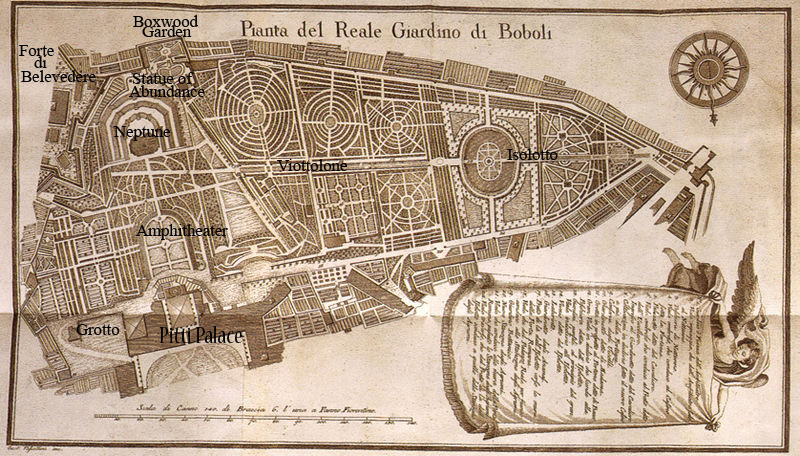 Immediately behind the Pitti Palace is the famous artichoke fountain in the center of a large courtyard with the 17th century amphitheater in the background. This area was the site of weekly ducal receptions, royal visits, and royal weddings. An obelisk brought from the Medici residence in Rome stands in the center of the amphitheater.

To the left of the palace is the Buontalenti grotto done in the Mannerist style. It consists of a series of interlocking artificial caves each decorated with statues or frescoes and encrusted with fake stalactites and shells. 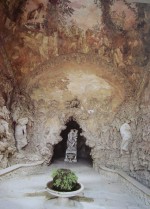 Michelangelo’s Four Slaves used to stand in the grotto but have been moved to The Academy.

In front of the grotto is the statue of the court dwarf and jester of Cosmos I, Pietro Barbino, who became the symbol of the carefree life of the Florentine people. 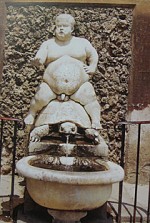 If you climb from the palace courtyard on the main axis up a moderately steep hill you will come to the statue of Neptune.

Further up the hill is a colossus of the wife of Grand Duke Francesco I in the guise of the Goddess of Abundance. She died of a broken heart when her husband fell in love with Venetian gal.

On the summit of the hill Cardinal Leopoldo de’Medici built a little casino and garden with a fountain, oleander, roses, persimmons, and parterres edged with trimmed box.

Further to the left is the Forte di Belvedere, a military fortification for the Pitti Palace built for Ferdinando I, that provides fantastic views of the garden and city of Florence.

By descending the hill on the right side of the axis along the Viottolone you can enjoy the woodsy areas, numerous statues, and long vistas that make the garden particularly appealing. 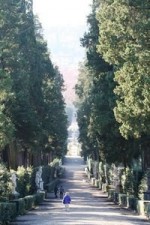 Eventually you will come to the isolotto, an oval pond with an island. In the center is the famous Ocean Fountain by Giambologna, surrounded by symbolic statues of three rivers, Nile, Ganges, and Euphrates. The sunlight sparkles off the water and gives a light airy feel to the place, quite a contrast to the peaceful, shady path that led to it.

As you wind your way back to the palace, put yourself back in time to a summer night in 1651 when Cosimo III de’Medici celebrated his marriage to Marguerite Louise d’Orleans. The garden was filled with courtiers dressed in their colorful best, even the men. Horsemen put their mounts through intricate figures to the music of over a hundred voices and a hundred instruments. A giant wood and canvas Atlas accompanied by a gold float representing the sun and a silver float representing the moon, came onto the scene, cracked open and became a mountain with pretty ladies on top. A huge artificial cloud rolled down the hill with the sound of thunder and a chariot of Jove pulled by four horses. Louis XIV was so impressed that he copied the ideas for a week long festival of his own. What a fabulous place the Bobobli garden is!